The Dallas Theater Center is staging the world premiere of “Hood,” a new musical version of the legend of Robin Hood. In this week’s State of the Arts – Art&Seek’s weekly look at what’s making news in the North Texas arts scene – Anne Bothwell (Art&Seek editor), Jerome Weeks (Art&Seek senior reporter) and Hady Mawajdeh (reporter/digital editor) talk about the show’s opening night. And whether it’s ready for Broadway.

Anne: This is a musical, so let’s start there. Hady, what were your thoughts about the music?

Hady: Well, the music is very folk rock-influenced – think of the band, Mumford and Sons. So that means there’s a stand-up bass, lots of guitars and, of course, lots of foot stomping and hand clapping. One tune that comes to mind is “I Say Yes.” It’s the first act’s finale (listen to it in the video above).

It’s a song full of positivity that galvanizes the musical’s lead performers and sets up the action for the show’s second act. It’s fun, and like the show’s other songs, there’s a lot of joy and excitement. But I have to admit, folk rock isn’t my go-to musical genre.

Anne: Yeah. You strike me as someone who’d be more interested in a hip-hop musical, like “Hamilton.”

Hady: Definitely. But even for me, this show brings it. It’s fresh and fun. 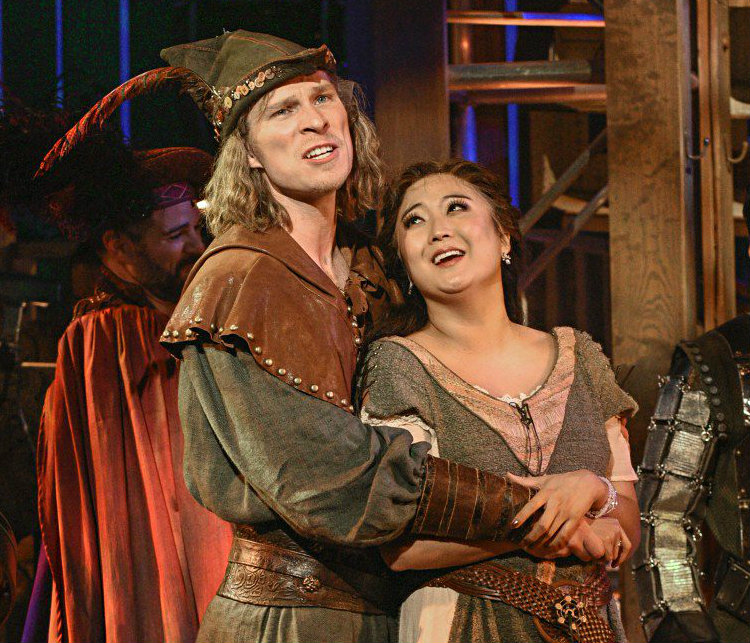 Anne: Yeah, it is entertaining. And there are some fun plot twists. I especially liked the spin on Maid Marian – she’s a better shot with a bow and arrow than Robin. Jerome, what did you think of the writing?

Jerome: It’s a spirited show, but it’s got a really clunky start and a lack of follow-through. There are a handful of performers who first appear, simultaneously delivering lectures on Robin Hood — perhaps they assume younger theatergoers will need the history lesson. And then the musical really begins with the whole company coming on as wandering troupe of actors announcing they’ll enact the Robin Hood legend.

Anne: Kind of like “Pippin” or “Godspell,” the performers address the audience. 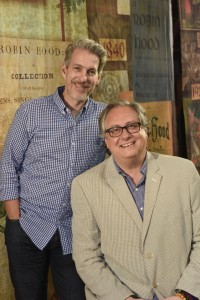 Jerome: Right. But here, that makes those opening lectures seem unnecessary, just a clunky false start. In contrast, ‘Pippin’ opens with that big, show-setting number, the one everyone remembers, ‘Magic to Do’ – and we always remember we’re in something of a quote-unquote circus. In ‘Hood,’ the wandering-players premise is never brought up again. Ever. Douglas Carter Beane, whose show “Give It Up” premiered at the Theater Center, is a funnier, smarter writer than that. He’s directing this show as well — which may account for the weaknesses. Sometimes, an artist needs to get some distance from a work as complicated as a musical. As it stands, the wandering troupe seems mostly a justification for the show’s funky, patched-together design, like something a troupe of players would put up quickly with blankets and home-made outfits, while a troubadour (Ian Ferguson as Alan A’dale) sings with the onstage band, sitting in a bar, complete with neon beer signs. That overall look and how it’s cleverly worked out – by John Lee Beatty (sets) and Gregory Gale (costumes) – is often just delightful, lending the show an immediate ‘don’t take any of this too seriously’ tone.

Anne: We all three had the same opinion regarding the casting of Nick Bailey in the role of Robin Hood. Hady, I think you had the strongest reaction. 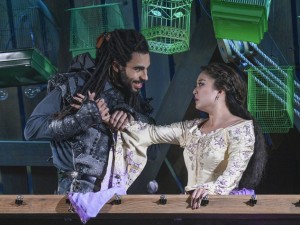 Austin Scott the Sheriff of Nottingham and Ashley Park as Marian.

Hady: Yeah, I think I did. And I want to say that I think Nick Bailey did a fine job as Hood. He’s got a good voice, he’s engaging. But I couldn’t help feeling that Austin Scott (the actor playing the Sheriff of Nottingham) should’ve been Robin. He’s got a great face. He’s animated. He’s just charismatic. And I don’t know if it was the wig or the seemingly invisible facial hair, but I just wasn’t buying Bailey as hood. 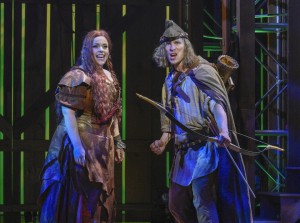 Jerome: I’ve objected before to how these shows are cast mostly out of New York, pretty much sidelining the Theater Center’s own acting company. So it was a pleasure that company member Tiana Kaye Johnson stands out as Lady Jane. She’s got real presence.

Anne: Yeah, but some of those New Yorkers certainly justified themselves.

Jerome: Oh, sure. Particularly Austin Scott as the sheriff, as Hady mentioned, you can’t take your eyes off him. And Alysha Umphress as one of the ‘merry men.’ Umphres has a singing voice that can set fire to a song.

Anne: The show uses puppets, making the evil authority figures into these wild caricatures. How’d that work for you? 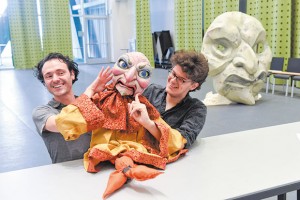 Stefano Brancato and designer James Ortiz show off some of the puppets in the ‘Hood.’

Hady: I grew up watching ‘The Muppets Take Manhattan,’ so they were a home run for me. They made the villains more palatable and funny. And Jerome, New Yorkers do have the lead roles, but there were several local actors in the show, outside the DTC’s own company. Fort Worth’s Luke Longacre, for instance, really did an amazing job with the voice of the puppet Prince John. I didn’t even know it was him. And he’s got great comedic timing.

Jerome: Hady, what the puppets reminded me of were those hilarious animated interludes in “Monty Python and the Holy Grail” — right down to the kind of grotesque faces and herky-jerky movements. They even were used for ‘action’ sequences like a marvelous ‘chase’ scene when soldiers pursue Robin up and down hill. Puppet designer Joe Ortiz took that patched-together look I mentioned earlier and he just ran with it — there are puppets seemingly put together with KFC boxes and Ken dolls. Frankly, the whole show could have been puppets and I would’ve loved it.

Anne: The Theater Center has certainly premiered other musicals. The hope is generally they’ll be developed for Broadway. Jerome, what do you think the chances are this show will make it in New York? 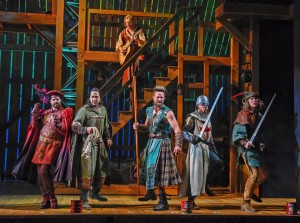 Robin Hood (Nick Bailey, far right), and his Merry Men, in ‘Hood,’ at the DTC.

Jerome: As it currently stands, I think it’ll get hammered by the critics. It’s not sharp enough, not focused enough — best represented by the fact it drags at the end, just as it had a start-stop-start opening. Of course, the show still could succeed without the critics’ blessings. Musicals have done that. I found a lot of ‘Hood’ fun but it didn’t gel. And it’s intended and promoted as a family show. Creating a hit musical like ‘Matilda’ or ‘Annie,’ a musical silly and lively enough to keep kids in the seats but smart enough that the adults won’t nod off – threading that needle, that’s hard. The fact that I easily remembered ‘Matilda’ and ‘Annie’ but have struggled to come up with other mega-successful family shows in that same humorous vein tells you something.

Hady: Sure, “Hood” is a work in progress. That’s what this kind of production’s for. But it’s definitely worth seeing.

Anne: I agree. Thanks, guys.