Crazy old Don Quixote rides again, thanks to Shakespeare Dallas. The outdoor Shakespeare festival has staged non-Shakespeare plays before. But this is the first time it’s commissioned a literary adaptation from a living author – in this case, Octavio Solis, the former Dallas playwright who got his start in the late ’80s with plays onstage in Deep Ellum. Art & Seek’s Anne Bothwell and Jerome Weeks sat down to talk about bringing Miguel Cervantes’ classic novel to the stage.

Jerome, I think it’s fitting that Shakespeare Dallas is presenting an adaptation of Cervantes’ novel because Cervantes was an exact contemporary of Shakespeare. And most of us are familiar with Don Quixote. He’s the legendary old Spaniard who believes he’s a knight. He rides off with his sidekick, Sancho Panza, and together they go on a quest and he attacks windmills because he thinks they’re giants. But does the Shakespeare Dallas production change any of that, play with it?

Cervantes’ novel from 1615 sprawls; it was originally published as two books. It’s akin to a picaresque novel, meaning it doesn’t build a traditional narrative arc that rises and develops. Instead, it follows one character along a string of episodes. Yet ‘Don Quixote’ is also incredibly complex and layered, with stories-within-stories. We’re at the very beginnings of the modern European novel, and here’s Cervantes playing self-referential games and undermining the author’s authority like the hippest, lit-crit-heavy, post-modernist wise guy.

So any adaptor has to choose which of the many episodes to use, which line to hack through this forest. With Octavio Solis’ version, you’ll see events that I don’t think any other treatment has really presented. Even so, most of the episodes tend to follow the same comic line. Don Quixote read so many books about knights and castles, he goes out to uphold the traditions of chivalry. He foolishly wanders around with his sadsack squire, Sancho Panza, believing ordinary folks are enemy knights or captive maidens he must save.

As a result, he and Sancho are often chased away or beaten.

So modern society has no place for ‘noble dreamers’?

JWThat’s one, pretty common interpretation. But Cervantes was mocking those old tales Quixote believed. It was like someone today believing in superhero movies.

At any rate, when ‘Quixote,’ the play, premiered at the Oregon Shakespeare Festival in 2009, it was done as a traditional period piece. It was set in the 1600s. But Shakespeare Dallas won a grant to commission Octavio Solis to re-write that first version. Director Gustavo Tambascio had the idea of updating the staging, setting it in Texas along the border.

Interesting. And how well does that work?

JWWell, kudos to Shakespeare Dallas for trying something different. Much of it’s amusing and clever – better than the many ‘Old West’ stagings of Shakespeare I’ve sat through. Here, Quixote doesn’t ride an old horse, he drives a mobility scooter. Sancho Panza doesn’t have a donkey; he has a paleta cart, one of those fruitcicle carts vendors push.

And when Quixote goes tilting at windmills, they are windmills but Texas ranch-style windmills. There are also musical numbers, which I suspect weren’t in Solis’ original version because they feature female mariachi dancers and boot-scooting in a country-western bar.

But here’s an example of Solis’ slyer updatings. The local priest argues the cure for Quixote is burning his books.

Priest: Fiction’s a terrible crime on literature. People read it and believe it. Worse yet, they look to it for moral instruction. And you know there’s only one book for that. 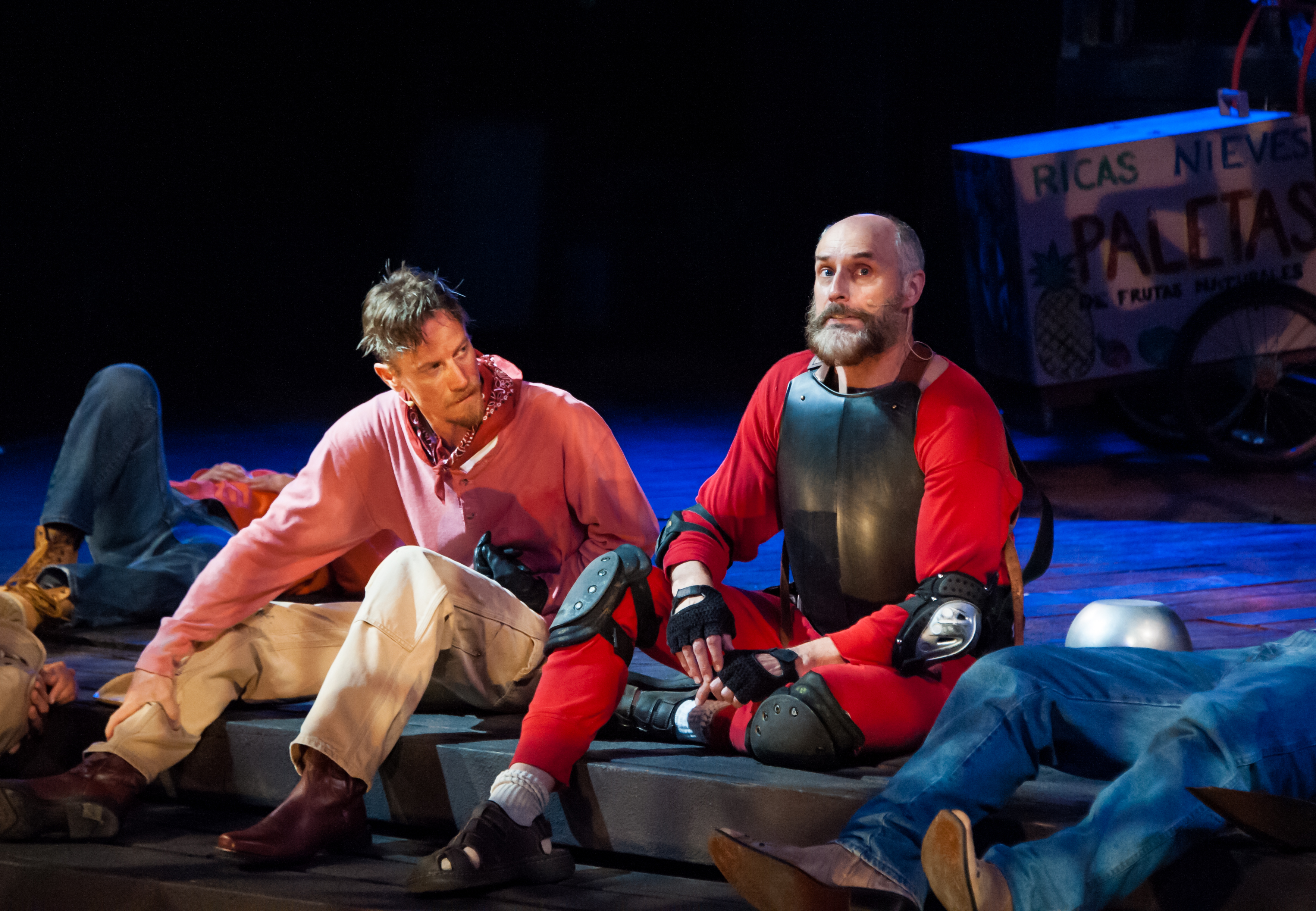 JWYeah, and Solis makes ‘Quixote’ politically relevant as well. Some people may think, ‘Great, another writer inserting contemporary political lectures where they’re not needed.’ But as modern readers, we miss a lot of the social satire that’s actually in Cervantes’ novel. We don’t catch the nudging and the winking. But obviously, we just heard Cervantes mocking censorship by the Catholic Church.

In that regard, ‘Don Quixote’ really becomes something of a debate over the value of fiction – with Cervantes playing both sides, knight vs. giant. Did those old novels inspire Quixote or simply delude him? Can a novel provide worthy guidance? But if fiction’s a fraud, shouldn’t it be banned?

So – a little sociopolitical viewpoint is not out of place onstage. There’s a grand, dramatic clash I won’t give away. It’s not in the novel but it’s timely and even moving.  And this is Jim Jorgensen as Quixote, imploring Dulcinea, his imaginary queen, his inspiration, to give him strength.

Quixote: Raise me up, and I pledge to protect the rights of the innocent, the weak, and the aged. To fight for the unemployed, the uninsured, the undocumented and the unwanted, I swear it!

OK, I see what Solis is doing there. These references to immigration and health care, they feel pretty in line with Quixote’s original ideals. It’s actually touching.

JWYeah, and for another thing, Jorgensen is really good as Quixote. He’s noble and driven – and clueless. I remember seeing him 25 years ago, soon after he graduated from SMU. These days, he’s mastered the kind of weary majesty that comes with age.

Yet I keep hearing a ‘but’ in your voice.

JWA big hurdle in adapting the novel ‘Don Quixote’ is Cervantes’ own voice. He’s the narrator. He interrupts, he dawdles, he makes deadpan comments, he apologizes with ornate courtesy, he wrings his hands. To convey that voice, Solis turns Cervantes into a character onstage, played by David Goodwin. And this Cervantes brings Quixote into the future, to us, to test the old hidalgo. But then as the play continues, Cervantes pops back in as different minor characters. 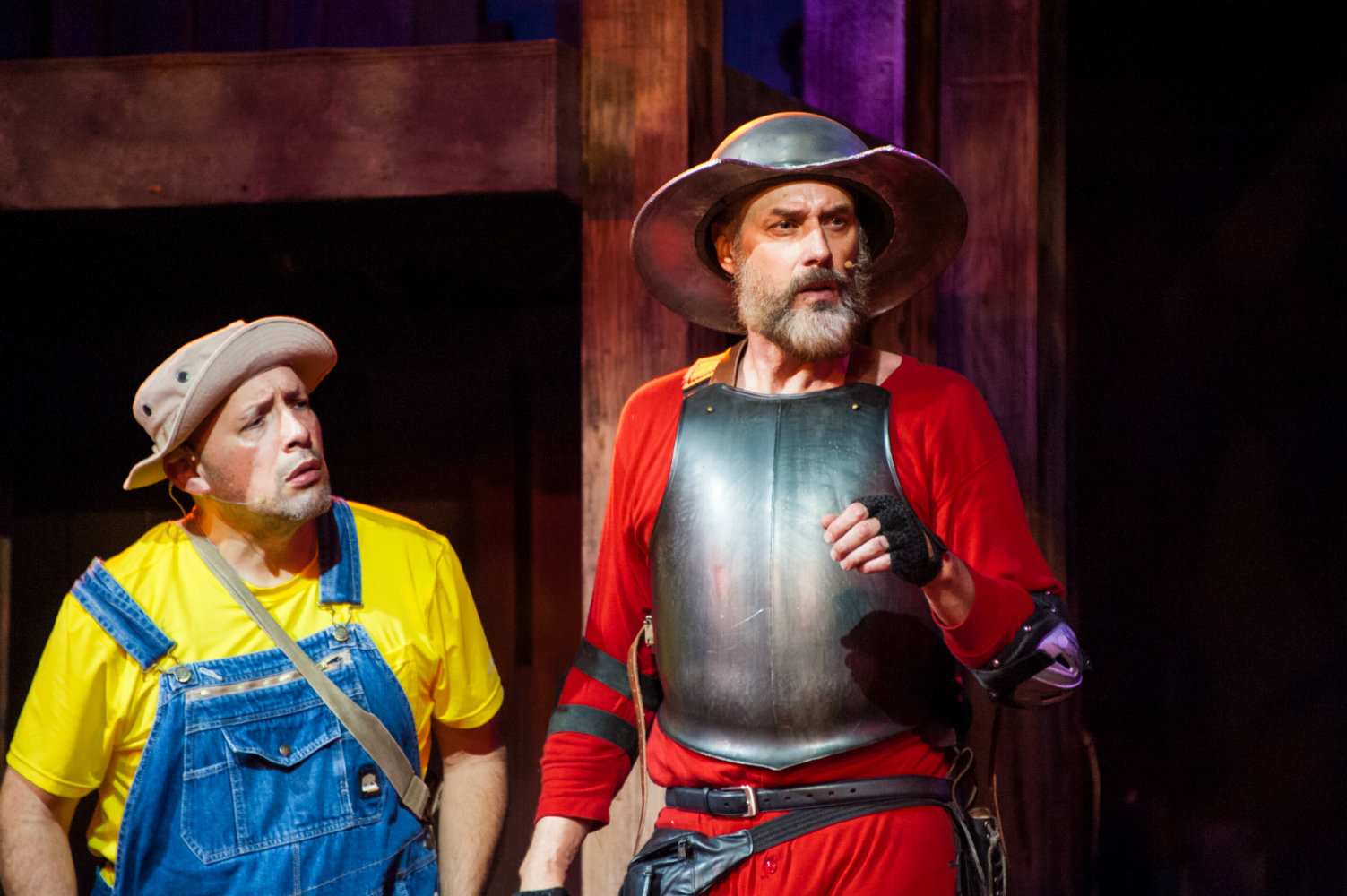 Oh Lord, it’s not another giant, is it? Anthony Ramirez as Sancho Panza and Jim Jorgensen as Don Quixote.

JWYeah. I understand why Solis did it but I don’t think the device works. It might have worked if it were played for laughs, at least sometimes. Or perhaps if it were done like a faux-solemn movie voice-over – only with the characters onstage occasionally objecting to this voice from the sky. But Goodwin’s Cervantes is stone-solid serious.

And Cervantes only adds to a play that’s already too long. Musical numbers,for instance, are supposed to kick life into a show, at the same time, the song expresses emotions the characters can’t express except by getting out the dance shoes and belting out a number. But the big dance numbers feel kind of stuck in here – as if they’re the sort of playful artifice Cervantes would have used if Broadway musicals existed in 1615. They don’t really forward the storyline or deepen any particular character – beyond the lovely bit of guitar underscoring Quixote’s plea.

Anthony Ramirez, as Sancho, brings his characteristic noisy fun to the proceedings. He may be the first local performer to act while getting tossed into the air on a blanket (a bizarre scene that actually is in the novel). But all that comic energy loses some of Sancho’s Eeyore-ish qualities. Sancho has always been the glum, reality principle to Quixote’s heedless fantasies, the earth to the Don’s air. Sancho’s hungry, he’s tired, he doesn’t know from knights and he’s suffering through all this out of a smidgen of loyalty and affection but mostly for the big payoff Quixote promised him.

For all his welcome energy, Ramirez and his paleta cart spin their wheels. Nothing he does – or Marcus Stimac, too, as a bullying innkeeper – makes the play go any faster. Shakespeare’s dramas can certainly run two and a half hours, and Cervantes’ novel, as I noted, sprawls all over the place as well. But ‘Quixote’ feels too long partly because it seems to be wrapping up several times – and disappoints us.  When the Cervantes character finally announces he knows how to resolve things, we’ve been checking our watches for 15 minutes.

So you’re not willing to follow this particular quest?

JWSolis’ script is smarter, more sophisticated than the musical ‘Man of La Mancha’ or most movie treatments. It fearlessly interweaves the ‘Cardenio’ love triangle, for instance. Quixote and Sancho learn that story from a miserable man in the wilderness. It’s also a story that Shakespeare picked up from Cervantes for his ‘lost’ play, ‘Cardenio.’ So one has to wonder if Solis is playing on that connection as well or whether he simply wanted to complicate Quixote’s story, preventing it from being one beatdown after another.

By the end, Solis’ play seems to fall somewhere halfway between his first traditional version and a fully realized updating/adapting. The seemingly improvised, tossed-together nature of the production (set design by Michael Sullivan, costume design by Claudia Stephens) can delight  – the way, for example, Jorgensen’s outfit includes safety kneepads, longjohn underwear and the don’t-care, old-guy pairing of socks with sandals. But why is the barber still a barber and a surgeon – which was true for 1605 but makes little sense and has little purpose here? Why keep Quixote’s barber’s bowl for a helmet – a tonsorial tool that no one’s used in decades? Is this, plus his breastplate, the only items he brought with him from the past? Why get traditional now? Why not a Home Depot bucket or an aluminum mixing bowl?

This between-two-stools, sometimes-clever, sometimes-clunky quality marks the show from the start.  I don’t think you need to have the author come onstage and invoke seven dancing muses to justify magically transporting Quixote to Texas.

Just bring him here, and let the old knight and his sweet, sad sidekick win our hearts all over again.