For the fifth year, The Arts Community Alliance (TACA) will award $100,000 to support local artistic innovation. This year, the TACA Donna Wilhelm Family New Works Fund will award $70,000 to the Bruce Dance Wood Project for a work exploring the refugee experience with award-winning composer Joseph Thalkan. And Dallas Black Dance Theatre will receive $30,000 to mount a new ballet paying tribute to legendary African American dancers and choreographers from the past century.

The winners were chosen from 11 applications, representing the full range of performance arts, by a volunteer panel of artists and art managers from across the country, including former Eighth Blackbird violinist Matt Albert, Executive Director of Chicago’s Goodman Theatre Roche Schulfer and Paul Taylor Dance Company dancer Parisa Khobdeh.

The jury was particularly impressed by the winning projects’ potential impact on the community, says TACA Marketing and Communications Manager James Jillson.

“The jury noted that both recipients have a strong relationship with the new work creators, that they’ve worked together before and the creators are very invested,” says Jillson. “And the two projects are aligned extremely well with their respective organization’s mission.” 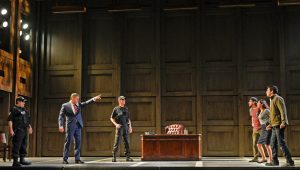 “Deferred Action,” from the Dallas Theater Center and Cara Mia’s Theatre, was a 2015 recipient of the New Works Fund.

Bruce Wood Dance Project is grateful for the support to strengthen their repertoire, says Gayle Halperin, president of the company’s board. Founder Bruce Wood, “was a prolific dance-maker who believed in the power of new works to invigorate the field, cultivate enthusiasm and build audiences for dance” Halperin says.

Dallas Black Dance Theatre’s award coincides with the organization’s 40th anniversary. The fund will pay for a portion of the commissioning and production costs of choreographer Matthew Rushing’s tribute to black dance, says Zenetta Drew, DBDT’s executive director. Set to a score by jazz pianist and composer Ted Rosenthal, the new work will premiere in November and honor performers such as Talley Beatty, Alvin Ailey and Donald McKayle.

Rushing’s new work “will both celebrate and shape the canon of Black dance in America,” says Drew.

“Deferred Action,” developed by Dallas Theater Center’s Lee Trull and Cara Mia Theatre’s David Lozano, was a 2015 recipient of the New Works Fund. TACA funded $50,000 for the show, which was inspired by the DREAMers, the possibly two million young people brought to the U.S. illegally by their parents who could have gained legal residency through the DREAM Act. The work is the second in a series after “The Dreamers: A Bloodline,” also supported by the New Works Fund in 2012.

“When it’s economically challenging, the thing that goes by the wayside is the risk work,” Rebecca Young, president of TACA, told KERA in 2012 when TACA launched the fund. “So there was real interest and real desire to not shut down the creativity of the artist and arts organizations that work in our community, but make it possible for that risk to take place.”

Since 2012, the New Works Fund has provided $500,000 in grants to 13 local performing arts organizations. Last year, the Donna Wilhelm Family announced its continued support of $100,000 each year through 2017.