J.D. Moore has made a career out of the study of skin.

“When I look at skin very objectively, it reveals very fascinating things,” he said. “The biological makeup of the skin. How it varies. How it reacts.” 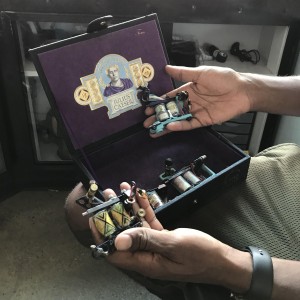 Moore has a collection of brightly colored coil tattoo machines, which he uses at the Last Angels tattoo parlor in East Dallas. Photo by Miguel Perez

Skin is his canvas as a tattoo artist. He began an apprenticeship shortly after graduating high school, and now business is booming at Last Angels, the parlor where Moore works.

But, skin is also the focus of his other passion.

Moore explores the nuances of skin, particularly Black skin, through lush oil portraits and the large-scale murals he creates all over Dallas-Fort Worth.

Many of his works depict Black women in repose, elegantly dressed with every fold and crease of fabric on display.

It’s an aesthetic that Moore latched onto before he ever put paint to canvas.

“The preparation of a tattoo requires a lot of steps,” Moore said. “It’s a lot of prep-work.”

As a tattoo apprentice, Moore learned about all sorts of inking styles, but he was most drawn to the lifelike, intricate works of the Renaissance and Baroque eras.

“There’s all these statues that work really well as tattoos,” he said. “It’s a tattoo style that’s predominantly black and grey, which looks like the stone, white marble sculpture.”

He was so inspired by Classical art that he picked up a paintbrush and went straight to the source.

“I went to Italy, and I lived in Tuscany for about a month,” Moore said. “My primary reason for being there was I want to learn how to fresco paint. Really take what I say I’m influenced by, see it in person, marinate on it, have it become a life experience, and then see what happens.”

Moore came back from his artist residency with an even greater appreciation of the body. It’s shaped his entire practice.

The Tarrant Regional Water District commissioned Dallas artist J.D. Moore to paint a mural on a floodgate located by the Trinity River in Fort Worth. Photo by Keren Carrion

“Because I do work so much with bodies and seeing the shapes in bodies when I’m putting designs on,” he said. “You sit with it long enough, you can really start to understand at least a little bit more than what it gives you at first glance.”

His training lets Moore see skin for what it is: a living organ.

“It is a constant changing variable from person to person,” Moore said. “The tone of their skin, the texture of their skin, even the placement on their body, the skin changes.”

But, he knows that when he steps outside his East Dallas tattoo parlor, skin gets more complicated.

“There’s a lot of it though that’s based in the mental coding that we’ve been programmed with,” Moore said.

Skin color is, after all, the foundation on which race was constructed, he says. It’s impossible for him as a Black artist to ignore race and racism in his work.

Addressing it is a responsibility. It’s also a distraction.

“I hate that I call it that because it is something worthy of my attention,” he said.

Moore would rather be thinking about skin through other lenses: science, philosophy, or spirituality.

But the events this summer — George Floyd’s death and the wave of protests against police violence —have commanded his attention.

“I had to stop that, put that book away, put that painting away,” Moore said. “A few weeks later, I’m at City Hall painting Black Lives Matter.”

A community effort. All hands on deck. Thank you EVERYONE. • • • It is my intention to communicate clearly that this demonstration of painting a large “BLACK LIVES MATTER’’ mural in front of city hall is simply the stepping stone between where we are socially and where we aim to be. Permanent paint on the ground would not suffice as change, no matter the statement. The statement “black lives matter” only exists due to years of the mistreatment and disenfranchisement of black people. The temporary nature of this mural is to meant to reflect that the need to constantly declare our lives matter will not exist in the future. The permanence the black community is looking for is legislative. A mural is just change on the surface. The change we are working so hard for needs to be engraved deep into our culture.

Moore is learning to balance the responsibility he feels to speak out against racism, with his desire to explore skin in deeper ways.

“My subject matter focuses on the most foundational problem, which is the way we view and treat Black women,” he said. “I feel like as an artist that’s all I can do is use my tool to express and to start a conversation.”

The Tarrant Regional Water District recently commissioned him to paint a mural on a floodgate in Fort Worth.

He chose to paint his sister.

“So, it has this angelic appearance to it,” Moore said. “With this red dress on, holding red fabric, walking through water, and there is this glow coming from her chest.”

The mural overlooks the Trinity River, its subject standing triumphant and powerful, her skin radiant. 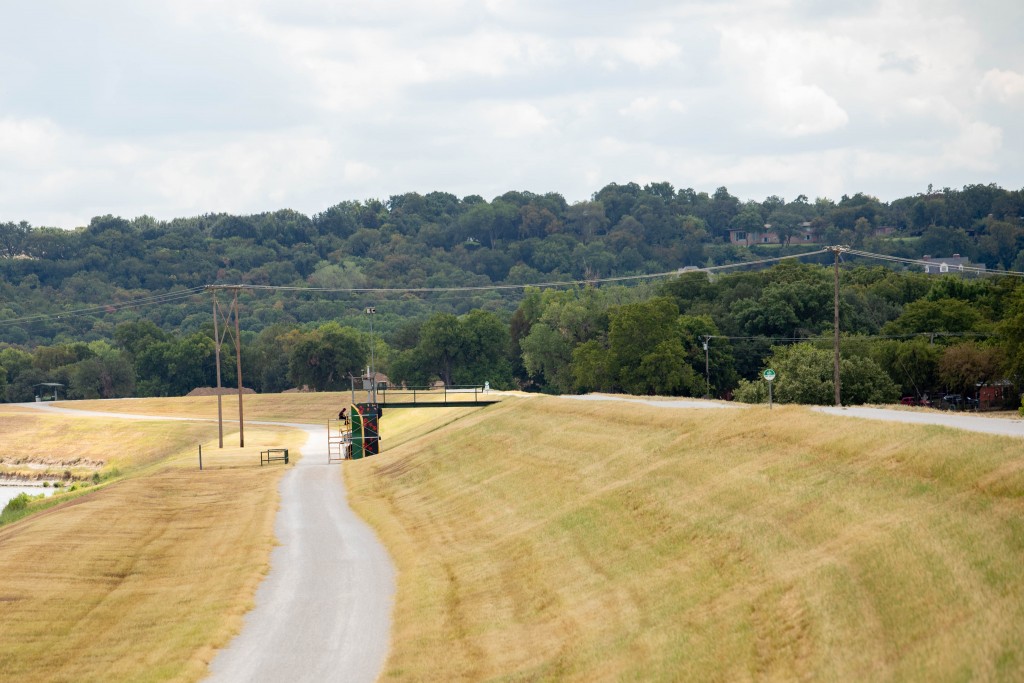 “It’s hard to conceal the beauty that is there,” he said. “I feel like you’re better off letting it be.”

Her body language — like in all of Moore’s paintings — speaks volumes.