Whether we knew it or not, for the past thirty years, Giva Taylor has shaped much of what we’ve seen on area stages – probably more than anyone else. She taught costume design at SMU and led its costume shop, and her students have worked in theaters all across North Texas. Meanwhile, her own designs have graced the Dallas Theater Center, Lyric Stage and Shakespeare Dallas. For Taylor’s newest show — ‘Three Sisters’ at the Undermain Theatre — the Artist Spotlight visited a rehearsal and costume fitting.

It was only fitting. ‘Three Sisters’ may be Taylor’s swan song as a costume designer. 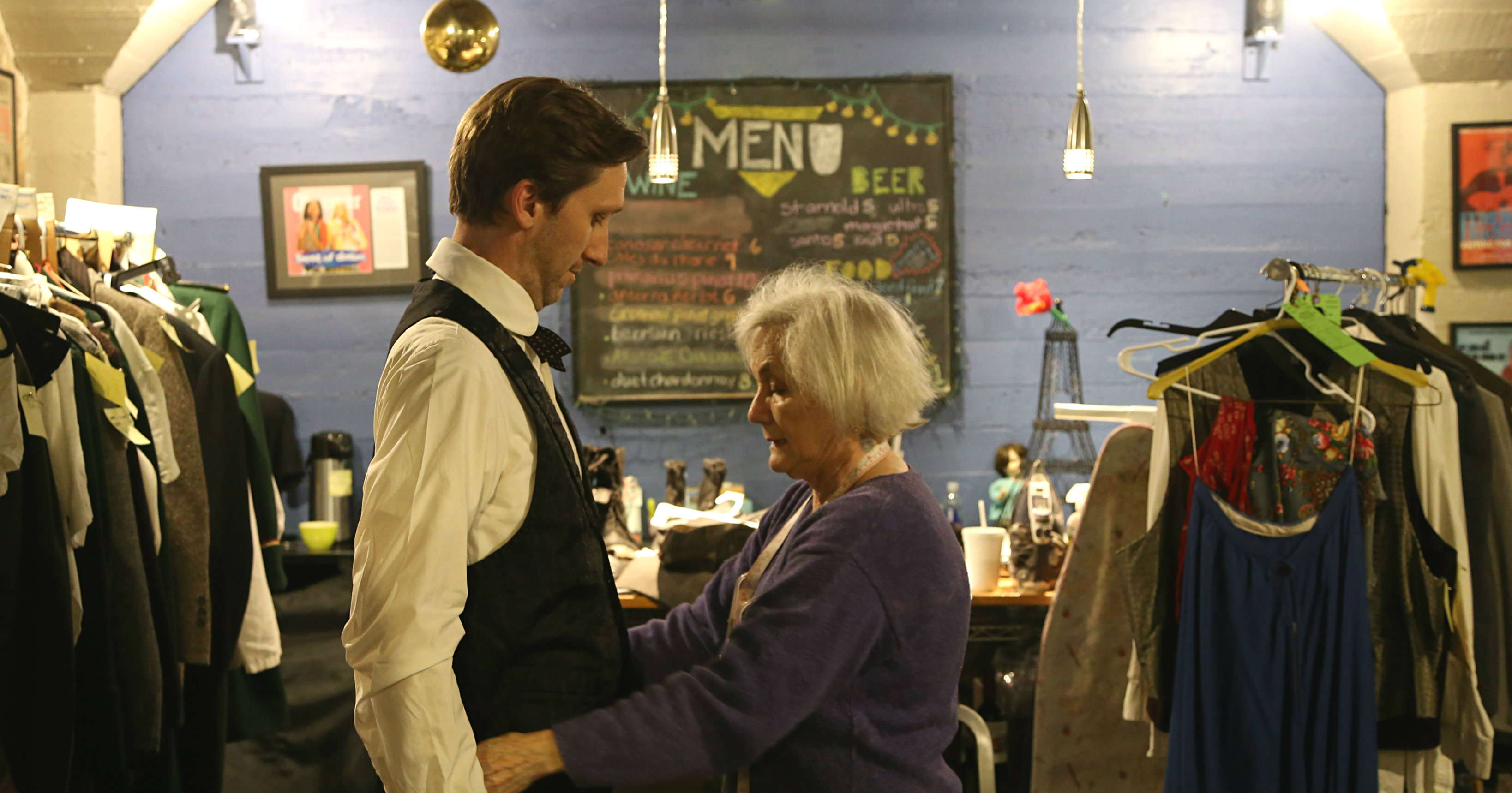 Anton Chekhov’s ‘Three Sisters’ – in a new translation by Sarah Ruhl – runs at the Undermain Theatre through March 11.

It looks as though the Russian Army has camped out in the Undermain Theatre’s basement space. Military hats and leather boots are in piles. The walls are lined with racks and racks of old-fashioned shawls, blouses and army coats. With the cafe counter, wine bar, the chairs and actors’ belongings everywhere, there’s barely room to stand, let alone squeeze by.

But standing in the midst of all this, 74-year-old costume designer Giva Taylor is quickly plucking out blouses and shirts, holding them up, deciding if they’ll work. The Undermain is rehearsing Anton Chekhov’s play, ‘Three Sisters,’ and actor Chris Messersmith steps out to show off her latest finds.

“Oh honey!’ Taylor exclaims. “You look great! I do think we would be smart to give you a belt. Or braces.”

“Braces, yes,” Messersmith says and grins. “Finding a pair of comfortable boots in a costume is a rarity.” 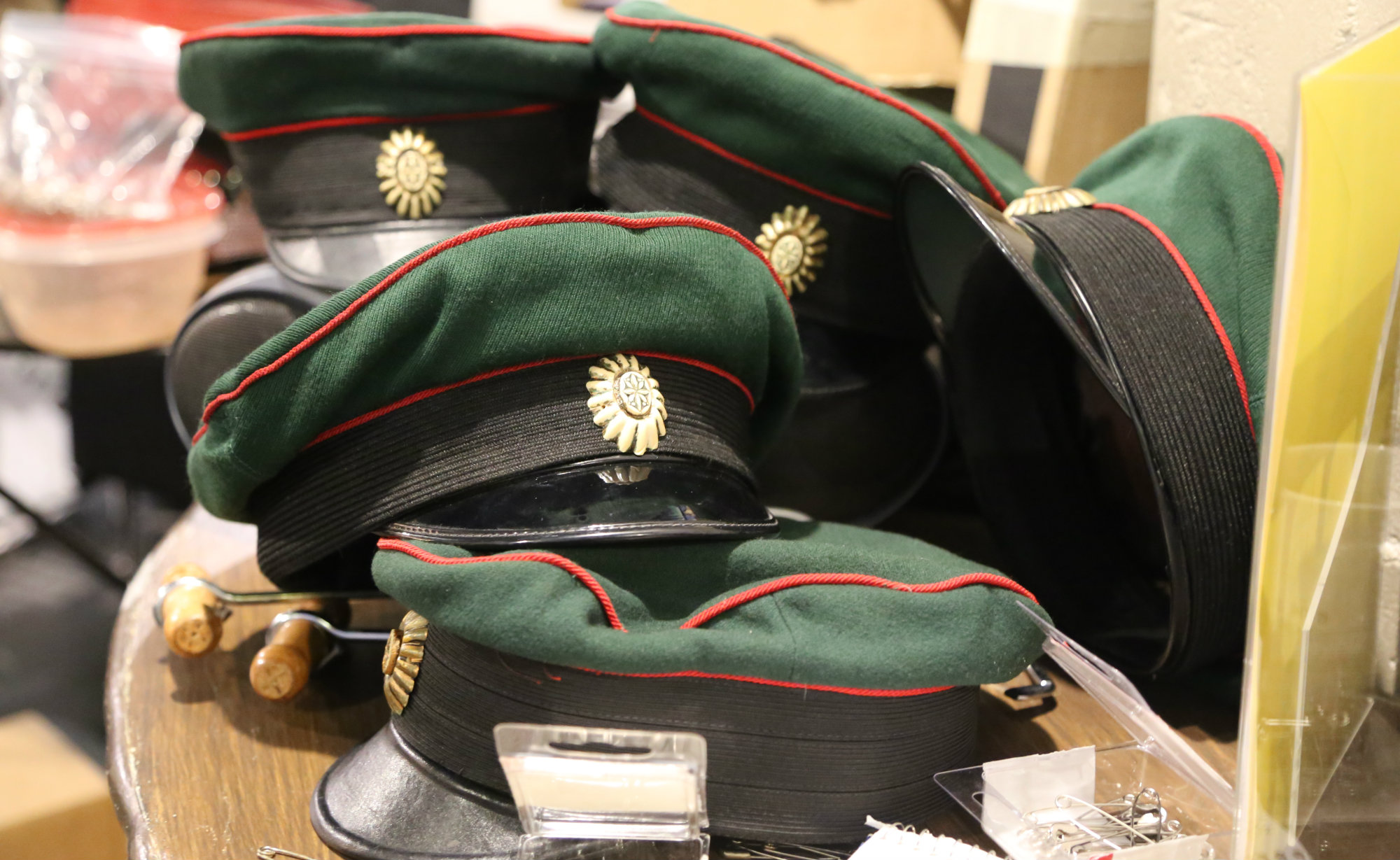 The Russians are coming! The military uniforms were rented from the Guthrie Theatre. Photo: Jerome Weeks

Chekhov’s plays often seem to be just little, wistful, comic family quarrels. But the cast of ‘Three Sisters’ is actually big, especially for the Undermain. The 15 actors are the largest cast the company has ever fielded. And we follow Chekhov’s family for more than two years. They’re Moscow-born and officially aristocrats because they’re children of the czarist military, but they’re stuck in a provincial town with a sleepy army garrison, spending their time teaching, marrying, despairing, having affairs, settling for the wrong lovers.

So the actors go through a lot of costume changes just to indicate the passage of time — let alone the different celebrations, a town fire, various departures.  Just how many outfits are there?

“I don’t know,” Taylor admits with a tired, rueful chuckle. “I think maybe I don’t want to know. Even to have dressing rooms for this many people is a bit of a challenge. Artistically, the Undermain could handle more. Physically, the Undermain cannot handle any more than this. We’re at capacity.”

Taylor should know: She’s designed two dozen Undermain shows. She’s costumed everything from the witches in ‘Macbeth’ to cyborgs in ‘Tomorrow Come Today” and the mobsters in David Rabe’s ‘The Dog Problem.’ What’s more, Taylor has been perhaps our most influential costumer — onstage and off. For 31 years at SMU, she taught design or ran its costume shop. Her students now work all over North Texas — and New York and LA. Meanwhile, her own designs have graced the Dallas Theater Center, Lyric Stage, Kitchen Dog.

But we haven’t seen much of her work lately. Taylor retired from SMU in 2015. A few months later, she was diagnosed with Stage 2 breast cancer. She underwent a lumpectomy. Then chemotherapy for four months. Then radiation for six weeks.

It was the chemo that wiped her out.

“Some people can do chemotherapy and not be badly affected at all,” she says. “It was devastating to me. I can’t remember a lot of it. I was mostly just  — not present. It really, really knocked me down. I have only recently gotten some energy back.”

But with her family’s help, she recovered. Her cancer scans are clear. She’s designed two shows already the past several months. 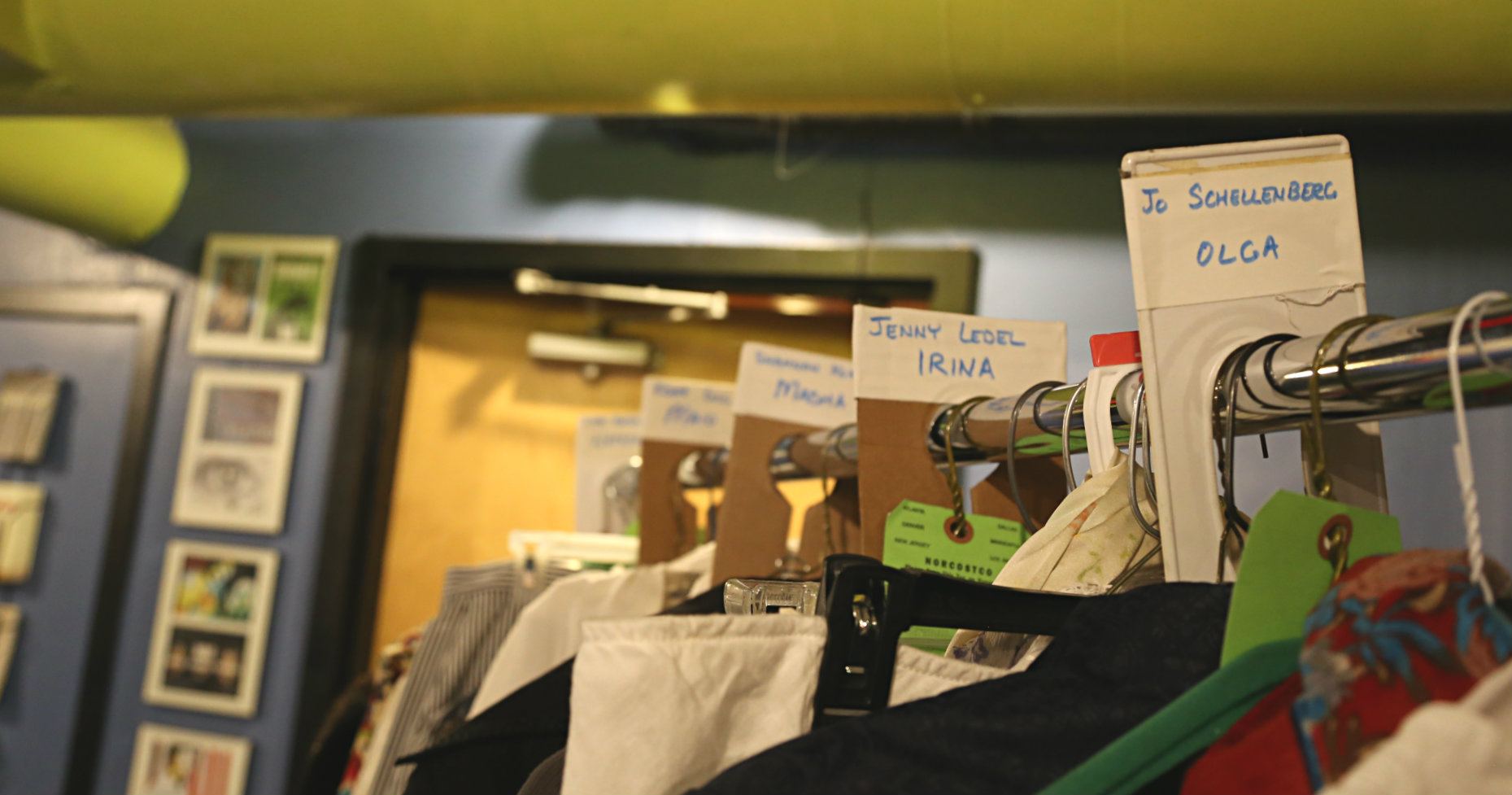 Olga, Irina and Masha – the three sisters, their costumes and the actors playing them. Photo: Jerome Weeks

But ‘Three Sisters’ is her return to the Undermain. And it may be her swan song.

When she started college at UT-Austin, Taylor says, she detoured into her real passion when she and a friend visited the drama building — and promptly switched majors from education to theater. Later, at SMU, Bill and Jean Eckart were Taylor’s great mentors in costume design. The husband and wife team, nominated for three Tony Awards, were masters of their craft on Broadway, designing the sets, costumes and lighting for such landmark musicals as ‘Damn Yankees’ and “Mame.” In 1971, the Eckarts came to SMU where they taught for 20 years (Bill did anyway, Jean died in 1993).

“I learned to see color with Bill and Jean,” Taylor says. “I learned that seeing was the most important thing, and thinking, even more than drawing. I learned I had talent. I learned that costuming was fluid. And clothing is narrative – every time. Every time. You cannot put clothing on someone without telling the audience something.”

Traditionally, a show’s designers — lights, costumes, sets, music — sketch out their ideas in advance. The director okays them, and that production is locked in, the look they aim for, building and stitching and composing. But Taylor doesn’t draw or sew up costumes from scratch that often. Instead, she settles on a general idea with the director and then pulls a show together like this: renting military uniforms from the Guthrie Theatre, sorting through pieces she’s collected. This is her fluid approach. The cast’s overall look evolves during rehearsals as she finds vests or shoes. Taylor says she scrounges all this stuff –

“Everywhere!” she announces. “Everywhere! I use Re-Threads. I use the Garland Road thrift. I use Salvation Army. I use Genesis, which is really good because it’s a woman’s shelter. So you often find very high quality items donated from Highland Park. I once dressed an actor in a [thrift shop] suit that was too small for him. He looked sad, I asked him why. He said the suit was one his mother had made him when he was younger.

“Frankly, it got so I thought we should never create our own new costumes. Why should we keep building costumes and just contributing to landfills when all this stuff is already out there, we just had to find it? But then,” she adds with laugh, “I realized all the people I’d be putting out of work.”

Her bout with cancer and chemo hasn’t dimmed her bright blue eyes or the delight she takes in her work. Right now, it’s Sarah Ruhl’s new translation of ‘Three Sisters’ that Katherine Owens is directing. The feel for the characters as rather contemporary figures plus Owens’ own dislike of rigid Victorian female wear allowed Taylor to develop a fresh, cleaner, period ‘feel’ without the era’s tendency toward over-decoration and stasis. She loves it.

“The only thing authentic about this show are those uniforms,” she declares, pointing at the Guthrie rentals. “And that’s because this translation is not period-pure. So what I ended up doing, with Katherine’s complete understanding, thank God, I dressed for character, making sure there was nothing that stood out so much it would contradict the spirit of the late 19th-century, early 20th-entury. But you look at the pictures of that period, and the women look so dowdy. And these women [in Ruhl’s translation] are not dowdy. One even has an affair with a married man.” 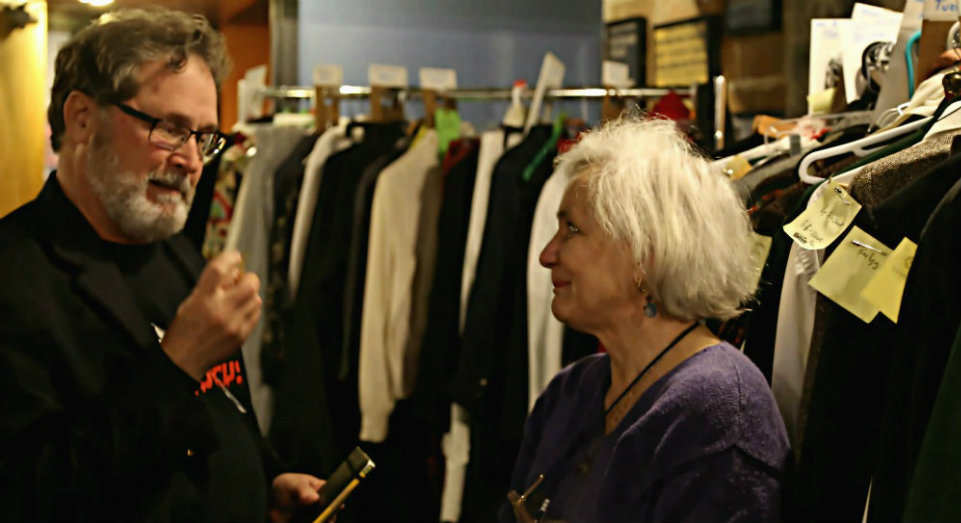 “I do, I do!” she laughs. “It’s all cheating. I  mean, this” — she pulls out a dress — “this is rayon! But look at it, it’s perfect for Natasha. The idea is to help define characters, to give the audience the feel of these people, and I just didn’t think they felt like that [historical] research with all those corsets and that very proper posture.  It’s really been an adventure because the rules don’t always apply.”

“Yes! There are rules,” she insists. “The rules you were taught as a costumer. A period was selected, a color scheme was selected, and you were true to that period, to those colors. But that was before we’ve had really wonderful work from all these playwrights who’ve broken the rules — people like Erik Ehn, Len Jenkin, Mac Wellman. How the hell do you do those guys in a traditional way? You just don’t. So I’ve learned to be much less rigid. And it’s really been fun. There have been no complete sketches, no complete lists [of accessories and costume items for each character, in keeping with time and place]. We assemble the costumes as we go along.

Although her process may be more freewheeling now, the results are consistent with what Taylor’s created over the years. She’s always had a particular panache with period plays, giving them a rich, detailed,  inventive look — and it’s even better when they are period plays on a bender like the delicate, 19th-century fairy tale ‘The Snow Queen’ or the noir-ish dreamscape, “Time in Kafka,” two of her most memorable Undermain creations. Simply put, in Taylor’s hands, costume history isn’t stodgy, yet it can also feel perfectly credible even when it’s jumbled in fantastical ways.

It’s suddenly break time for the rehearsal. The cast floods the lobby looking for power bars and coffee.

“Did you come for a fitting?” Giva teases her husband, T.A. Taylor, who plays a drunken army doctor in the play.

“Or we’re you going to tell me you love me?”

“Of course!” he announces happily. “I love you!” She laughs, they hug. He has to go make coffee because there isn’t any. 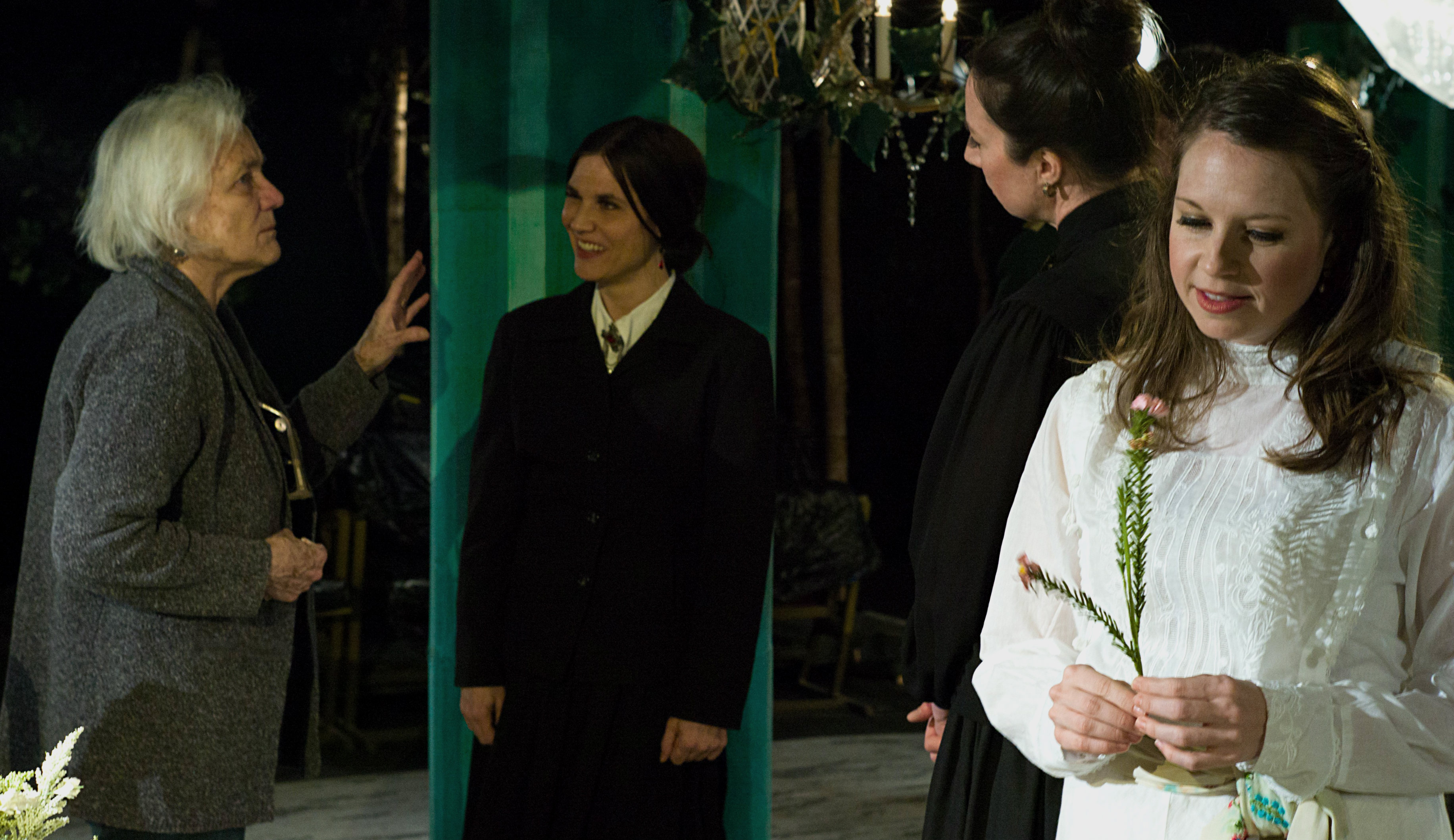 The Taylors met at SMU when he was a grad student there, and later this year, it will be their 40th anniversary. Back in 1977, Bill Eckart advised Giva to leave academia to get professional experience in New York — and TA had an internship at the McCarter Theatre in New Jersey. So they moved. Giva worked in Manhattan costume shops during the day, designed off and on Broadway on her own, mostly for the (now-defunct) Direct Theatre.

Once, she even designed a futuristic drama.

“That was the first time I used bubble wrap,” she says happily. “And I actually got a review in ‘The New York Times’ for my bubble wrap!”

But after having three children — and an unhappy side trip to Norfolk, Virginia for six and a half years — the Taylors eventually moved back to Dallas in 1990. Here, TA acted in TV and theaters, and for 19 years, he was the director of KD Conservatory, the acting academy, while Giva designed and taught at SMU. Until they both retired the past two years.

After all this time, Taylor insists, costuming remains a great passion — even though, yes, she’s seriously considering putting away her tape measure for good.

But if ‘Three Sisters’ is her swan song as a designer, the cause won’t be cancer.

It’ll be her grandchildren.

She wants to spend more time with them.

Alternating. One in Alabama. One in California.