As we head into bluebonnet season, a new play explores the legend of how the flowers came to Texas. Maria Rocha co-wrote “Yana Wana’s Legend of the Bluebonnet” for Dallas Children’s Theater. She’s also executive director of the Indigenous Cultures Institute in San Marcos. In this week’s State of the Arts conversation, Rocha tells me why it’s important to reclaim this story.

You co-wrote this play with Roxanne Schroeder-Arce. What brought it about?

Several years ago, Roxanne and Robyn Flatt, who’s executive director of Dallas Children’s Theater, had thought they might want to write a play about the legend of the bluebonnet. And when Roxanne

“Yana Wana’s Legend of the Bluebonnet” at Dallas Children’s Theater through April 8.

talked to me about it, we began to see that the legend that had been created by a non-indigenous person, wasn’t really true to the indigenous way of thinking and way of doing things. For example, one of the problems was the tribe that was attributed to have experienced the first bluebonnets had only been in Texas for 300 years. So they would not have seen the first bluebonnets, which were created maybe a couple of thousand years ago.

In the play a 12-year-old girl named Maria is having trouble in school. So her mother sends her from Dallas to stay with her grandmother in Laredo. And it’s really a big culture shock for Maria. But her grandmother has this plan. What is it she wants to teach Maria.

The grandmother is aware that Maria is not familiar with her indigenous identity.

Maria has lived in a modern world with computers and notepads, and the philosophy that the individual is the most important. So she hasn’t learned lessons about community and being responsible to your community. And to be an indigenous person who is proud of that identity.

Part of Maria’s journey involves tapping into her ancestral memory. Can you explain what that is?

When she heard these drums for the first time, they effected her in such an emotional way, she felt she had heard these drums before. And she had. Through her ancestral memory. It was passed down to her that these drums were important in a cultural way,

When we started working on the play, we asked Hector Martinez Morales, a composer, if he would help us to compose some new songs.

Many of the songs we have currently are ceremonial songs.  So they’re sacred and we cannot share those.  But he was able to create new songs, using the same rhythms, the same instruments, and his songs were as though an ancient person had passed them down through the generations. That’s how beautiful those songs are. 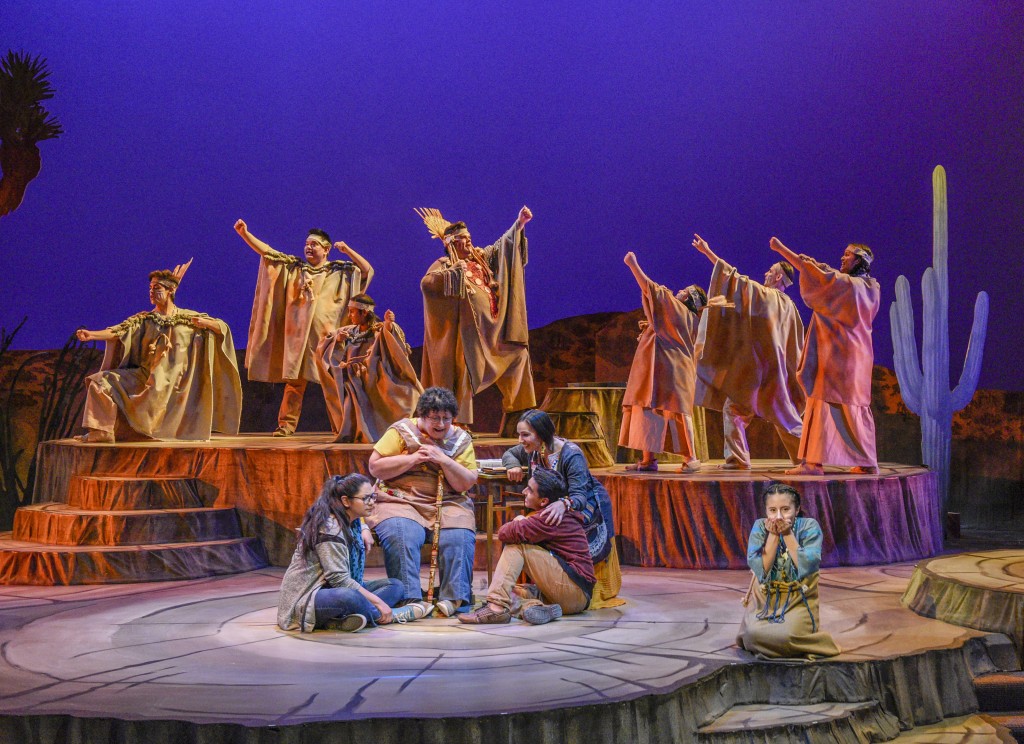 There are 28 actors in this play and all but five are indigenous. That seems noteworthy.

It’s amazing. And it’s emotional to see all these people together. When we had our first actors crew meeting, I took a look at all of them and could not believe the historic moment we were experiencing. And this path, this journey we are going on together as Native people, creating something from nothing and making it so important and vital for children all over the United States. This is just a miracle.