Skip Navigation
Home > ArtandSeek.net > The Meyerson Is Under New Management

The Meyerson Symphony Center has just switched hands – when it comes to running the place and keeping it up.  Wednesday, the Dallas City Council approved a lease that hands over management and maintenance of the celebrated concert hall to the Dallas Symphony. Art & Seek’s Jerome Weeks reports on what this means – for the city and the symphony.

It’s Tuesday, and maintenance workers are still vacuuming rainwater out of the Meyerson lobby. Last Saturday’s torrent dropped three inches of rain in just a couple hours. The water forced its way through an upper window in the hall. Debi Pena, the Dallas Symphony’s vice president of people and facilities, gives me a tour of the water damage. 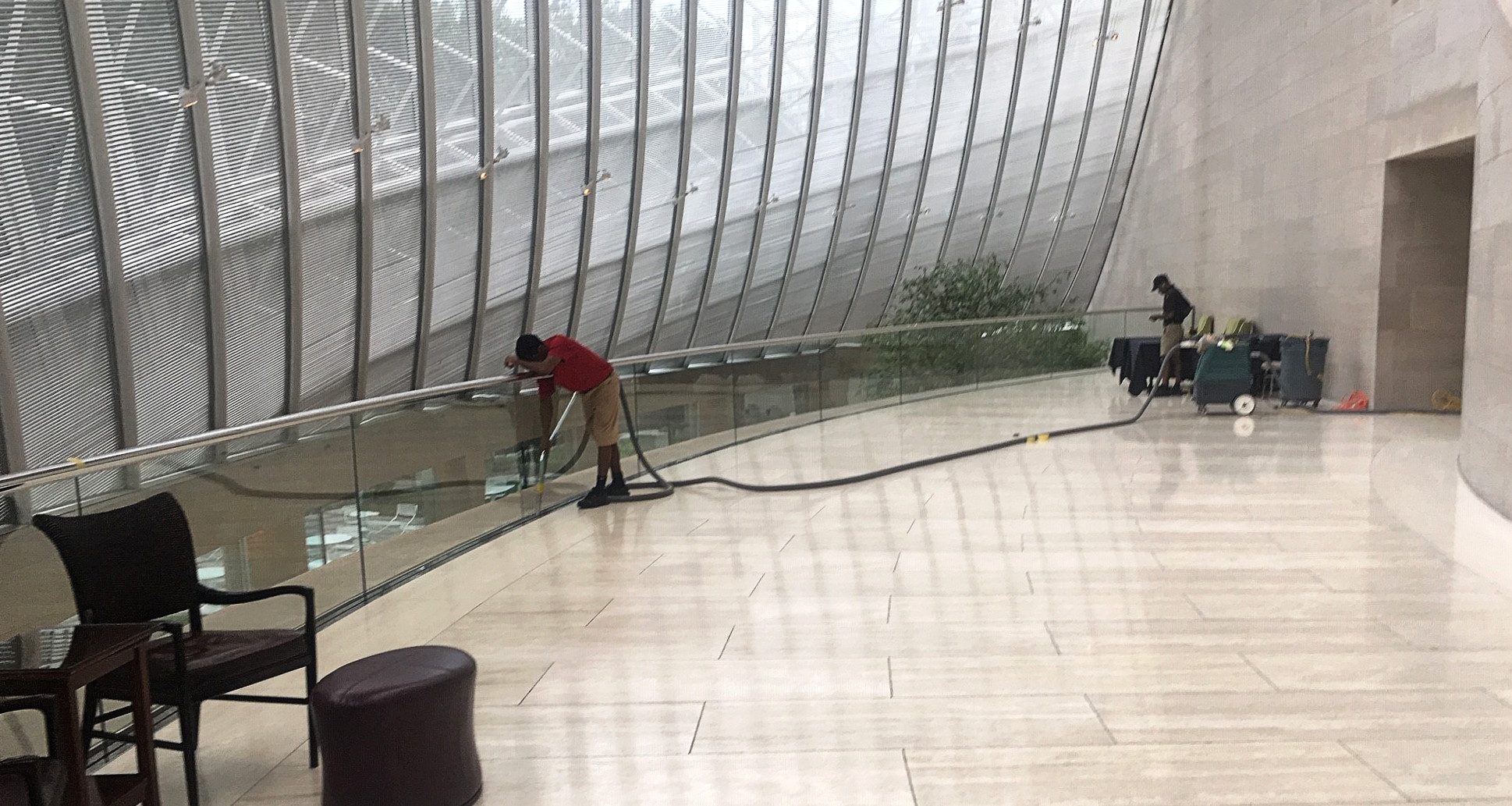 Maintenance workers vacuuming water out of the air-conditioning vent – where it leaked after flooding across the loge. Photo: Jerome Weeks

We climb up to the balcony – or loge – and she points overhead to where water stains mark the concrete on the top of a window. That’s where the water came in – but then, how did it damage the ceiling on the floor below? That’s where the rainwater eventually poured out of the lighting fixtures – on the underside of the balcony. Pena says, they figured out the water flooded clear across the balcony, then slid down into an air-conditioning vent. From there, “it dispersed through the ceiling” in the lower lobby. And exited via the lights.

“It was crazy,” she says. And the damage – other than all the cracks and discoloration across the ceiling?

“It ruined some furniture,” she says. “We had to move patrons to other seating.”

So it was entirely confined to the lobby? It wasn’t in the concert hall?

“That’s correct. The concert hall has maintained its integrity. But we’ve got some new leaks that we had not seen before this weekend.”

Rain damage on the right – on the wall and the ceiling directly above the Ellsworth Kelly painting. Photo: Jerome Weeks

The rain had unbelievable timing. It hit just three days after architect I. M. Pei died. He designed the Meyerson thirty years ago, when it was hailed as one of the world’s great concert halls. But the torrent also hit just four days before the Dallas City Council unanimously approved a 99-year lease that hands over the hall’s maintenance and management to the Dallas Symphony – almost as if the rain damage were the clinching evidence a change was needed.

Councilmember Rickey Callahan spoke Wednesday. “Certainly you’ll do a better job than our city has done,” he said. “And I regret to say we haven’t kept our part of this bargain. But going forward, with future bond campaigns and the facility charge, we’ll be able to make those improvements, so congratulations and good luck to you.”

Saturday’s leak was hardly the first. On the lobby wall nearest the Winspear Opera House hangs an Ellsworth Kelly painting – four brightly colored stripes of canvas running down the wall. Directly above the orange one, rusty water stains are visible on the wall and a fist-sized water blister is overhead. In fact, three years ago, voters passed a $3.5. million bond issue that was intended, in part, to fix just such leaks. That money is still – slowly – being spent on repairs. (“City procedures take a long time,” Pena explains.) 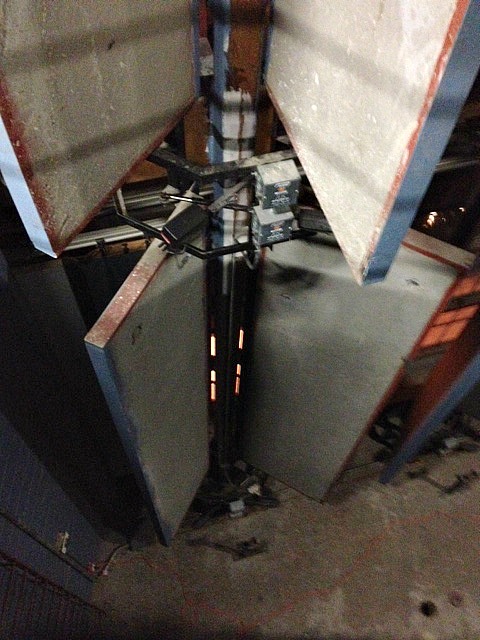 The reverberation chamber doors that are hidden upstairs at the Meyerson and help shape the ‘sound’ of the hall.

It’s not just rainwater: One of the major distinguishing features of the hall’s vaunted acoustics is that they are adjustable, thanks to the 74 reverberation chambers hidden behind the black mesh and wooden grill running along the top of the the back of the auditorium. The motorized concrete doors can open and close – expanding or decreasing the volume of the hall – and thus the length of time music will reverberate. They were a  something that acoustician Russell Johnson designed and fought for. Today, 23 of the 74 doors currently don’t function (each can weigh up to two and a half tons).

And it doesn’t stop with non-functioning doors. “Frequently, we’ve had people trapped in the elevators,” Pena says. Just three weeks ago, they had to call the fire department, once again – in order to ‘extract’ several patrons who were trying to leave after a concert.

Not the happiest way to end a night out listening to Brahms. And this, remember, is considered one of the top 10 concert halls in the world.

And it’s not even just repairs. The hall needs improvements to get up-to-date. Pena cites the sound system, which is original with the building. Meaning – it’s 30 years old. You may have CD players collecting dust that are newer than that.

Concertgoer Dorothy Derouchey  has another concern, as she pointed out in the lobby during a concert last week. The Meyerson is tremendous, she said, “except not for the handicapped. There’s not enough elevators and stuff. And it’s not been maintained.”

Increasing handicapped seating and improving access, Pena says, are on her list of 16 million dollars’ worth of upgrades and fixes. Some of that money will still come from the city. The DSO has pledged to raise $5 million. And some of the money, Pena says, will come from using the hall more effectively, more often – meaning really booking it as a music and events venue.

“The city right now is losing approximately 1.8 million every year,” she says. “There’s over one hundred dark nights. You know, they’re not really in the position to market the building and to lease it. Some of that is they don’t have sales staff. They have general operations staff. And we’re going to put in the staff to do that.” 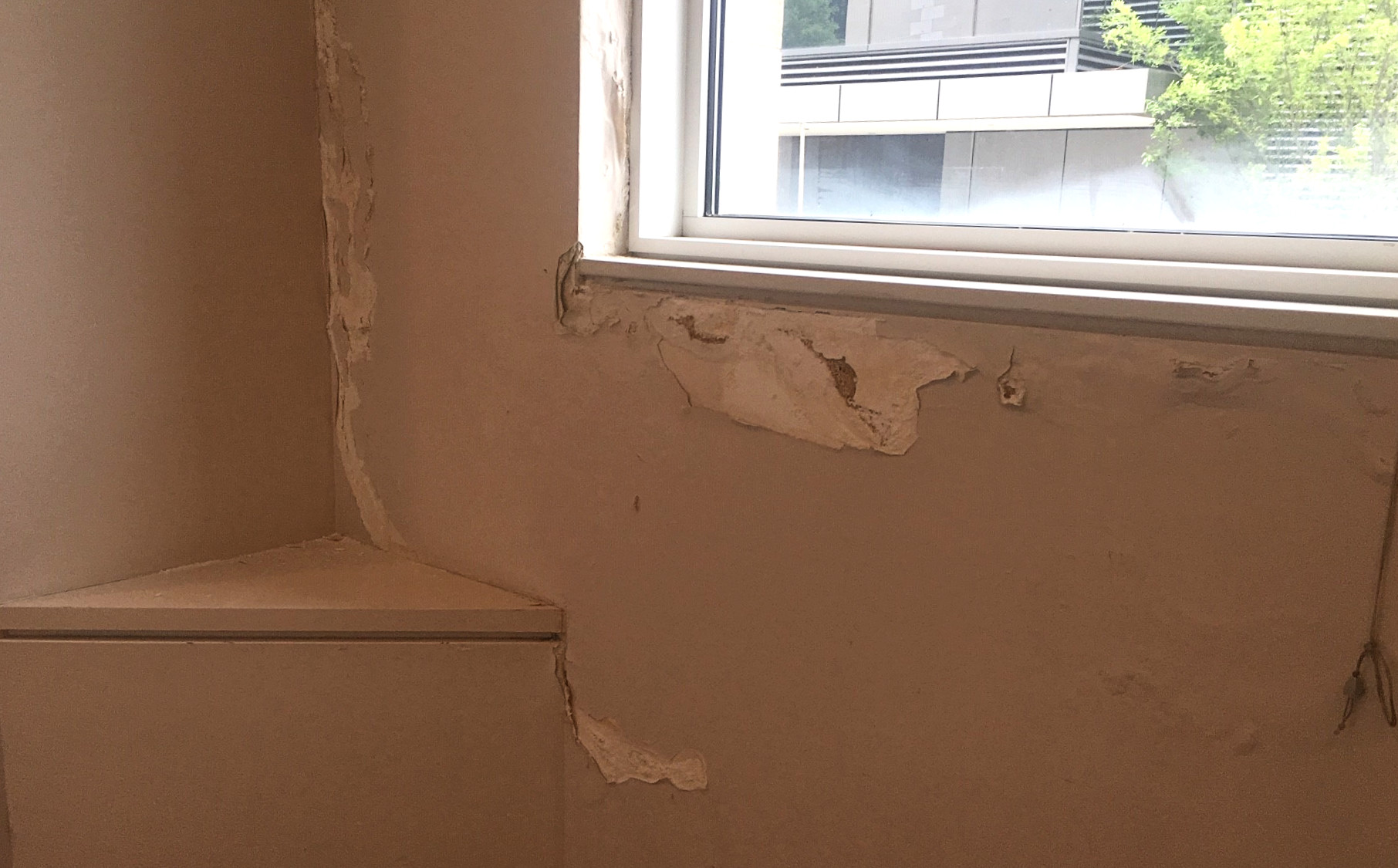 For years, Dallas has left its cultural facilities to struggle against a growing pile of millions of dollars in deferred maintenance. Just when smaller arts groups and minority organizations have fought for a more equitable distribution of the city’s arts dollar, venues from the Kalita Humphreys Theater to Fair Park have hit ominous levels of disrepair.

Signing over the Meyerson to the DSO – much like putting Fair Park’s operations into private hands — are attempts to address some of these longstanding issues. Pena explains.

“The new cultural plan speaks to the city getting out of building management and to really redirecting that money over a period of time to organizations that need to be uplifted.”

The new lease holds the DSO to new responsibilities – including raising those 5 million dollars. Otherwise, the hall reverts to the city.

Councilmember Philip Kingston, whose district includes the Meyerson, expressed his confidence in the symphony’s management of the concert hall – with a caveat.

Which means more than just plugging the leaks.