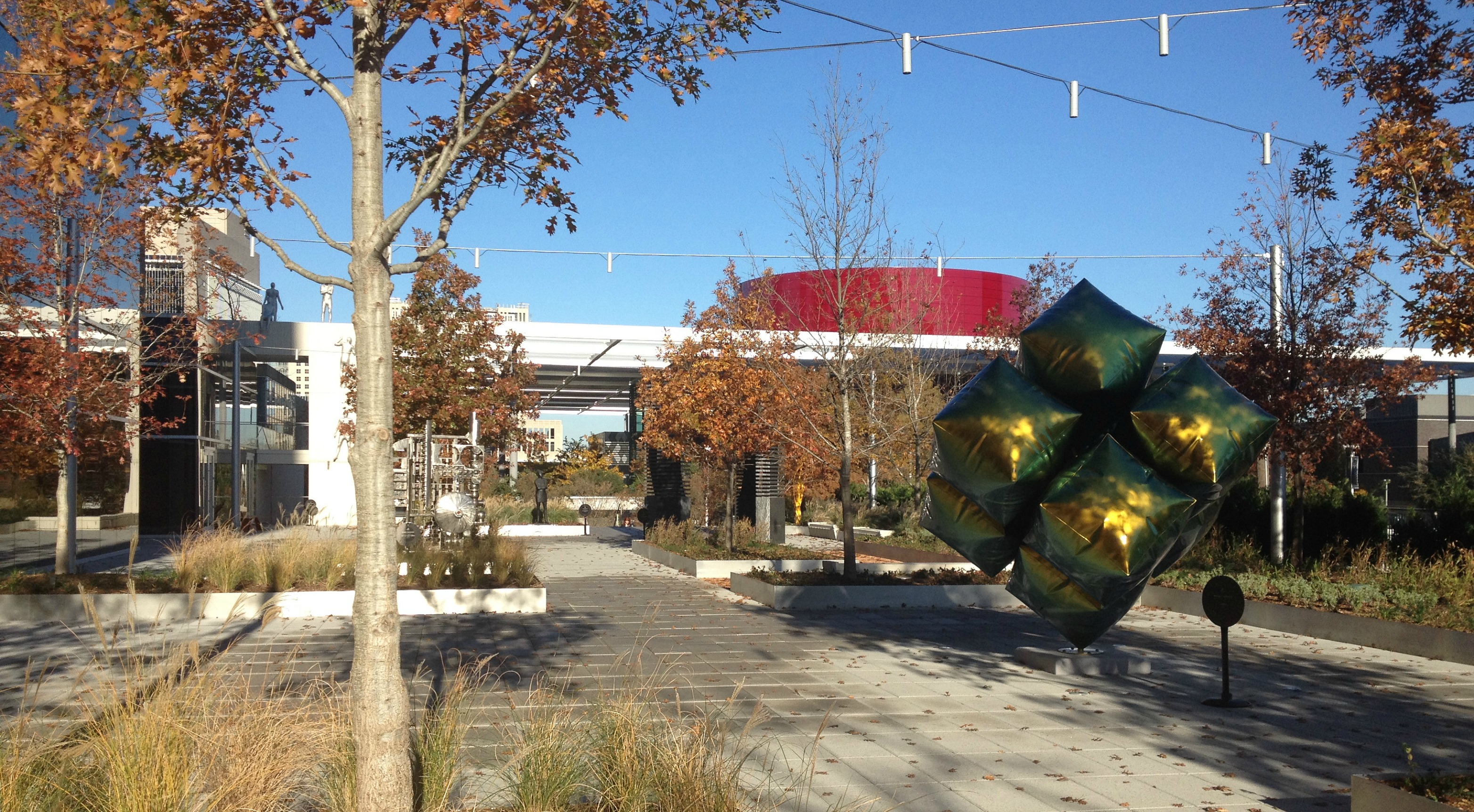 The Hall Texas Sculpture Walk with William Cannings’ Cubed’ on the right and on the left, middle, George Tobolowsky’s ‘The Stainless Internet’ and the back left, Steinunn Thorarinsdottir’s ‘Paths.’ Photos: Jerome Weeks

It opened in October, but you may not have seen the latest art gallery in the Dallas Arts District. Most of its sizable outdoor artworks are tucked away along a walkway next to Hall Arts. That’s the newest office tower in the Arts District, the one with the vertical LED stripes right next to the Cathedral Shrine. Art & Seek’s Jerome Weeks and Justin Martin have walked the sculpture walk and sat down to talk about it.

So I’ve been done this path. But what is this thing?

JWIt’s kind of like a long, skinny, miniature Nasher Sculpture garden.  Or like one of the courts at NorthPark, with the modern sculptures and all the plantings — only stretched out thin. The walkway is officially the Hall Texas Sculpture Walk. But the whole thing — the walkway, the art in the building lobbies next door, the big yellow sculpture across Ross Avenue — they’re all part of Craig Hall’s art collection. He’s the developer of Hall Arts, the 18-story-tall glass tower that’s there. And then there’s going to be a hotel and yet another luxury apartment high-rise going up in the empty lot next door. So in between that lot and Hall Arts is this elevated plaza, I guess you’d call it. You climb up these steps and there are these 19 artworks on display.

So are any of these sculptures by Texas artists?

JW Some are big name Texas artists like James Surls and Jesus Moroles. In fact, the black granite towers that are here, Moroles’ ‘Spirit Inner Totems,’ was the last piece the master stone sculptor finished before his death in a car wreck in June. But just which pieces are officially part of the Texas Sculpture Walk and which are simply part of the Hall Arts Collection is too complicated to get into here.

Now we need to take a listen. This is Hall himself — from a short documentary — on how and why he collects:

I got into collecting art when I was a teenager. My mother was an artist and an art teacher. Art for me speaks to individuals in different ways. And it makes people think and it makes people smile. It helps arouse creativity. 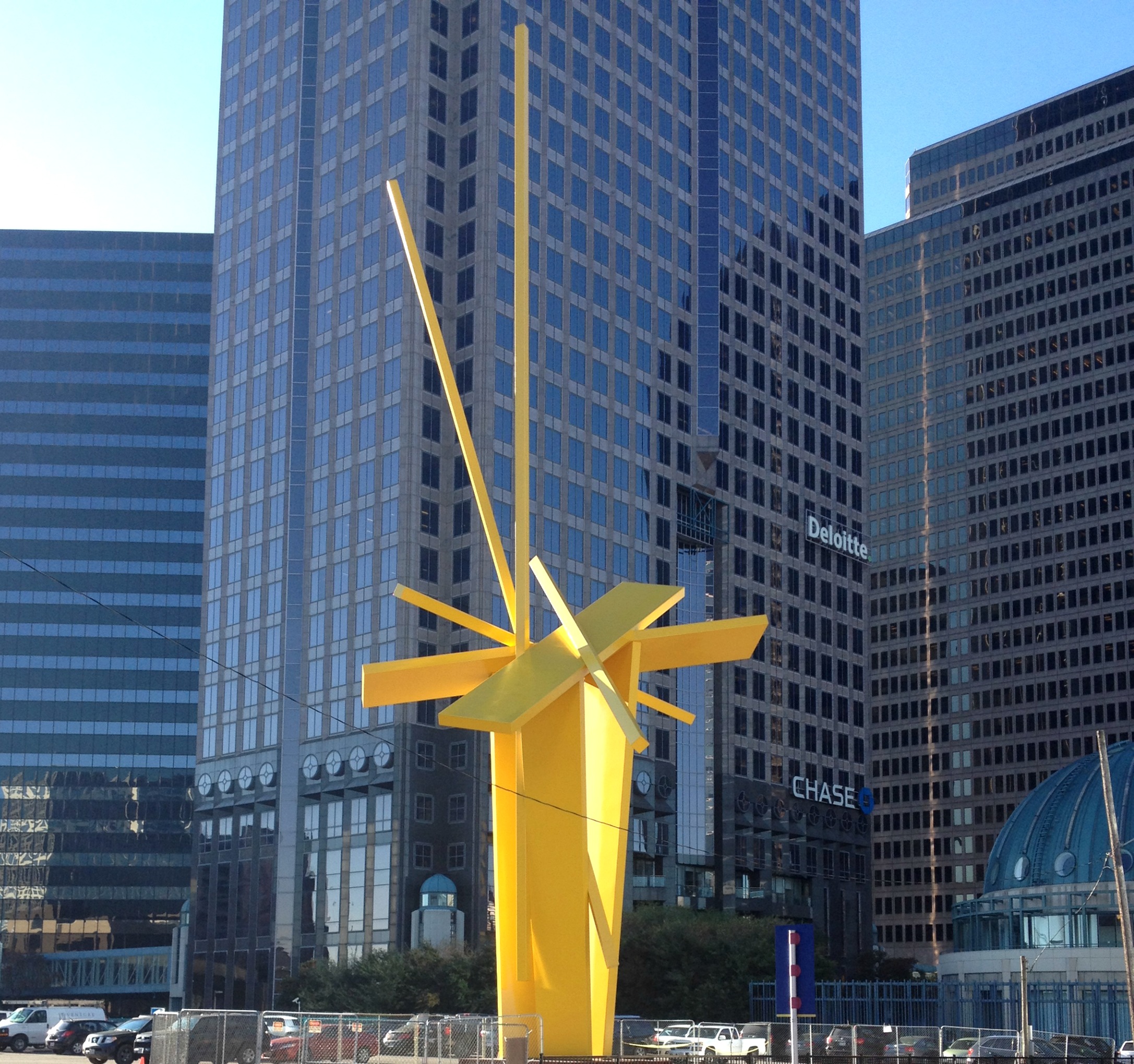 Hall talking about art making people smile is interesting because, so often, developers just plop down some large thing out in front of their property because they’re supposed to, I guess. Or because the sculpture is just another signpost. It says, ‘Look over here! This is important and classy!’ Which is kind of what artist John Henry’s big yellow, arm-waving sculpture across Ross Avenue seems to be doing.

Now, I can understand one reason for Henry’s giant sculpture called ‘Tatlin’s Sentinel’ — and for its eye-catching presence. Most people driving or walking past on Ross or Flora Street will probably have no idea there’s a sculpture collection up these steps — although the ‘Sentinel’ — which is named after the Russian avant-garde artist Vladimir Tatlin, hence, its kind of Constructivist look — the ‘Sentinel’ will most likely get people to look over there, to the other side of Ross. Which is where more development will be going up, so perhaps that’s its purpose.

But anyway, back to the need for a signpost. There is something of an archway to the walk on Ross Avenue, formed by two, different, black -steel pieces by Surls  — ‘Stairway to Heaven,’ of course, and ‘Again in the Meadow.’ They’re situated to form something of an official ‘entrance’ on top of the steps.

I happen to prefer Surls’ work in wood, raw wood, burned wood. The gnarly textures give his very sophisticated sculptures almost a totemic, dream-like, “primitive” quality. Steel pretty much strips all that interest away.

Both of these arched pieces do have signature elements of Surls’ art — leaf or petal shapes, for instance — but because they’re on top of what can look like light poles or scaffolding and the tops, ironically enough, are obscured by tree branches, I suspect many passersby will not recognize them as welcoming sculptures. 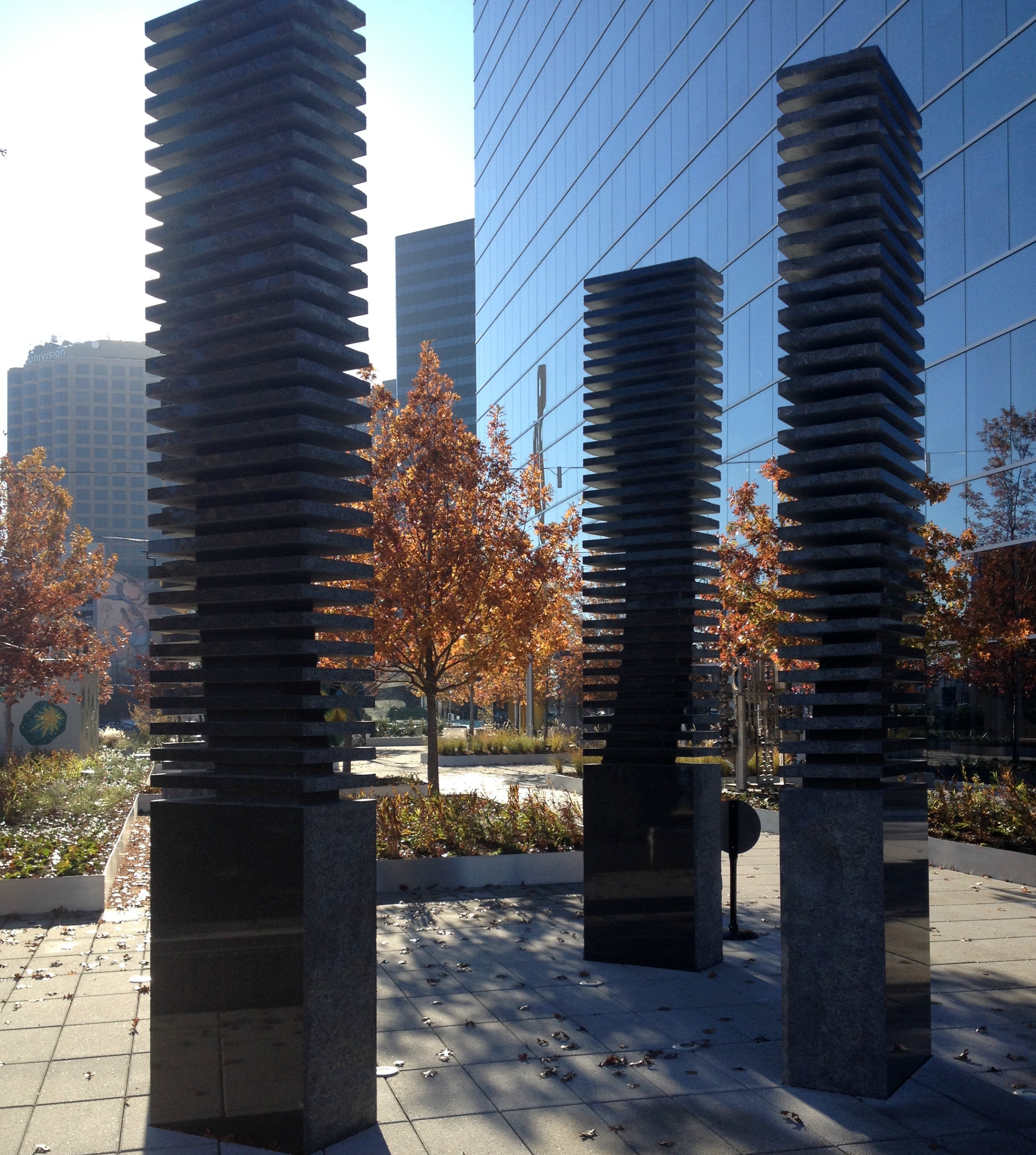 Dallas seems to have this tendency to shoehorn culture and parks into tiny, inconvenient niches — like the way so much has been crammed into Klyde Warren Park. Or the Fountains at Fountain Place. They’re undoubtedly landscape architect Dan Kiley’s masterpiece but, once again, most people on Ross Avenue have no idea there’s this incredible cascade, this calming space only a few feet away from them. Yes, part of its effect comes from the feeling of being secluded from the rest of downtown, but it’d be nice if more people accessed that seclusion, enjoyed Kiley’s beautiful pools and fountains.

So — back to my point — I can see why someone would put up the ‘Sentinel.’ You need something that large and banana-colored with all the bland office towers and the Pritzker Prize-winning wowzers in the immediate vicinity. The color’s fun, but I confess it made me fully prepared to dislike the sculpture walk.

Yet a number of the works here  — which have been curated by Patricia Meadows — are actually charming, even amusing. You think?

‘Cubed’ by William Cannings — I believe that’s his name. It’s a cluster of four inflated cubes on their side, suspended that way. Clearly, it’s inflated. Clearly, it’s made of this vinyl material that has this reflection. But you walk up to it, you touch it — which is I guess what the artist wanted — and it’s made out of stainless steel!

JWYeah. For people who know Jeff Koons’ steel balloon animals, ‘Cubed’ will seem familiar. But Cannings is playing with weightlessness. You’d swear this thing is like an inflatable chair, you could kick it across the street or something. But yeah, it’s solid steel. Now, one of the other works I liked was ‘Paths’ by the Icelandic artist Steinunn Thorarinsdottr – it’s those aluminum people climbing up the wall. And if it weren’t for a couple of them sitting down, I’d swear they’d all look like a jailbreak, like they’re trying to escape.

JWThey’re like mobile stanchions, you can pick them up. I think the artworks are going to rotate. I think that’s why there aren’t permanent plaques installed. And, of course, the construction of the whole area isn’t finished yet.

Now, we didn’t see the walk at the best time of the year. It’s fall, so the trees are bare, and the plantings really haven’t had time to fill out. But it’s also hard to make a final judgment on the walkway because if the hotel and the luxury apartments next door are built slam up against this walkway, it’s going to look like it’s been wedged in there. It’ll be just a crowded little alley, another inconvenient niche. And I think that’ll be unfortunate.

So is there anything coming up this next week you want to mention?

JWNext weekend, at the Eisemann Center, the Tuzer Ballet will present its 31st annual Nutcracker.

And what makes this one special is last year, we reported that Tanju Tuzer, the founder of the company and one of North Texas’ great dance teachers, had advanced colon cancer. So we asked, was this his last ‘Nutcracker’? Well, after chemo therapy, his doctors say he is 80-90 percent clear of cancer.

So on December 19th and 20th, Tanju Tuzer is returning in the role of Drosselmeyer. 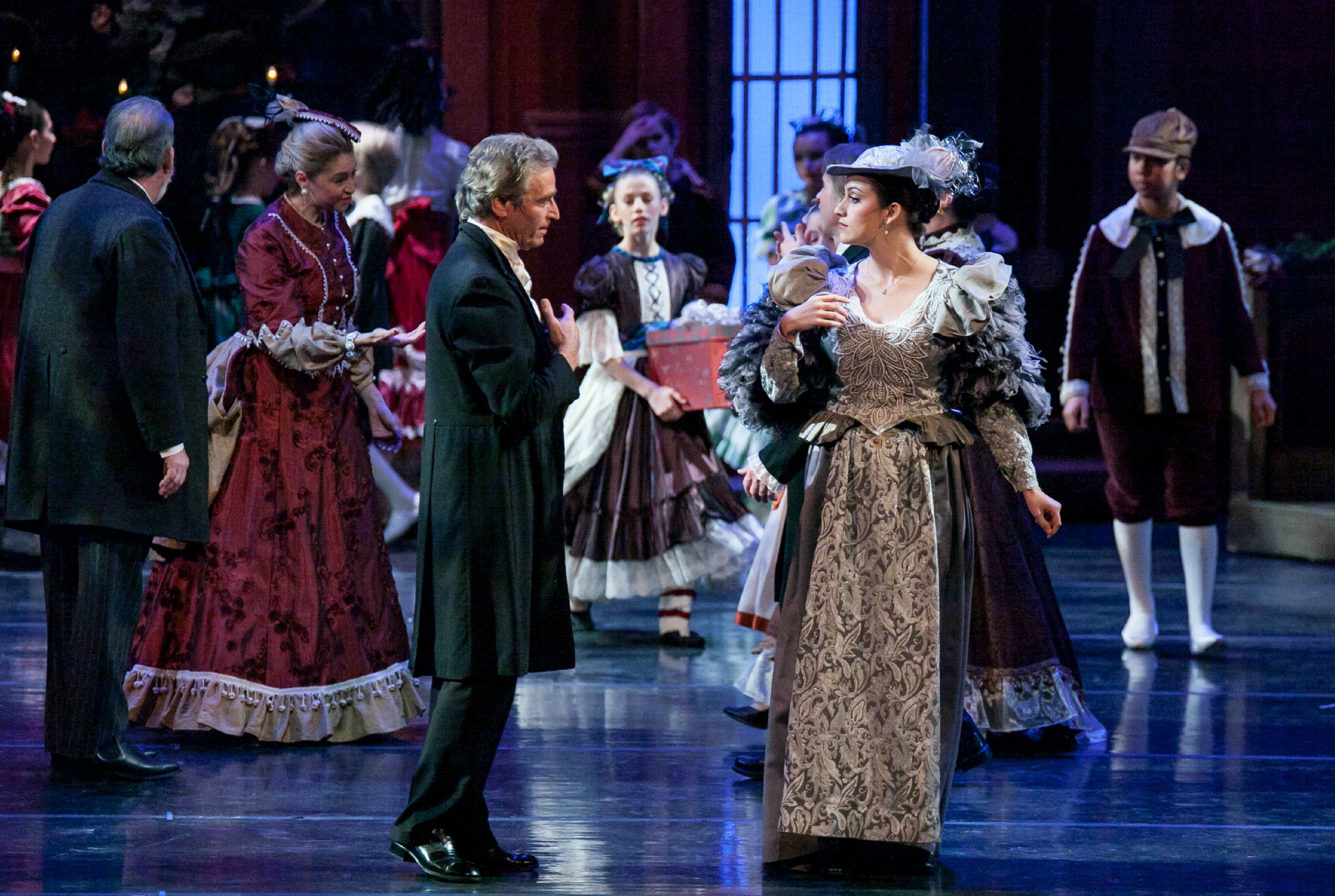