Skip Navigation
Home > ArtandSeek.net > The Teen Actors of Cry Havoc Theater Got Escorted Out Of The NRA Convention

Art & Seek has been following the teenage members of the Cry Havoc theater troupe for months now as they’ve interviewed people – politicians, a gun range owner, gun control advocates, shooting survivors — for a play about the entire gun debate. The high schoolers even became NRA members so they could attend last weekend’s convention. The group spent Friday and Saturday doing just that.  But on Sunday, they were escorted out of the convention center by police.

Late Sunday morning, three members of Cry Havoc – Sheldrick Pearl of Skyline High, Fabian Rodriquez and Andrew Beeson, both seniors at Seagoville – were interviewing a young man on the convention floor, while the theater company’s videographer, Taylor Valdez recorded them. They attracted the attention of Charles Brown, a nearby gun vendor. He told the group that unless they had press credentials, they shouldn’t be interviewing.

Valdez warned told the students the vendor was probably going to call security. 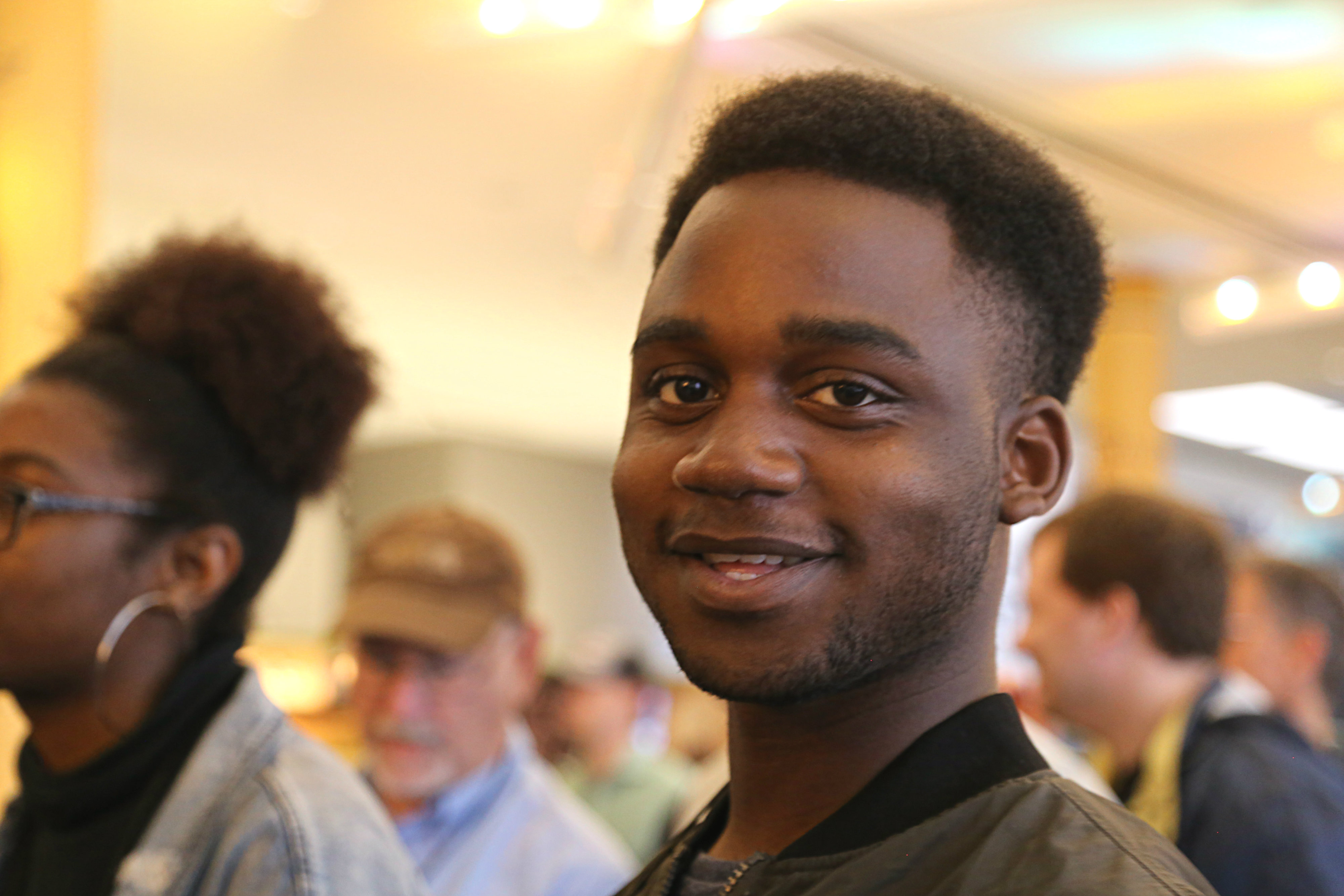 One of the teens, Fabian Rodriguez, recalls, “”She was like, we should probably go, and we were just walking until the security, he was like, ‘Excuse me, guys,’ and we thought he was just going to pass us, but then he was like, ‘You guys can’t be recording, you guys have to get that out of here.’

Art&Seek is following the Cry Havoc troupe as they research and create their play, ‘Babel.’ See previous stories here, their trip to Washington D.C. here and their personal experiences with gun violence here.

The students’ interviews are for ‘Babel,’ a play they’re developing on the gun debate — from background checks to school shootings to open carry. Eventually, all ten students, and the three adults who accompanied them – Valdez, Cry Havoc director Mara Richards Bim and assistant director Allison Hibbs – were escorted out by security members and Dallas Police officers. They were told they could return – but without their recording equipment.

The vendor, Charles Brown, is president of Hi-Point Firearms, a gun manufacturer from Ohio. He called security.

“I’m not saying that the questions they were asking were inappropriate. I’m just saying that the fact they didn’t have press credentials, and they were interviewing people about their opinions, it’s just not how you follow the rules here. I’ve got nothing about people asking questions. We answers questions for three days here, y’know?”

While Brown speaks, some convention visitors around him videotape each other waving and talking. Others photograph the elaborate displays of weapons and holsters and accessories. One even records himself talking for a Facebook audio post. Very few of them wore press badges.

The NRA did not return a request for comment. The association’s website includes an extensive firearms policy for its conventions. But there’s no apparent policy about what members can or cannot ask others there. 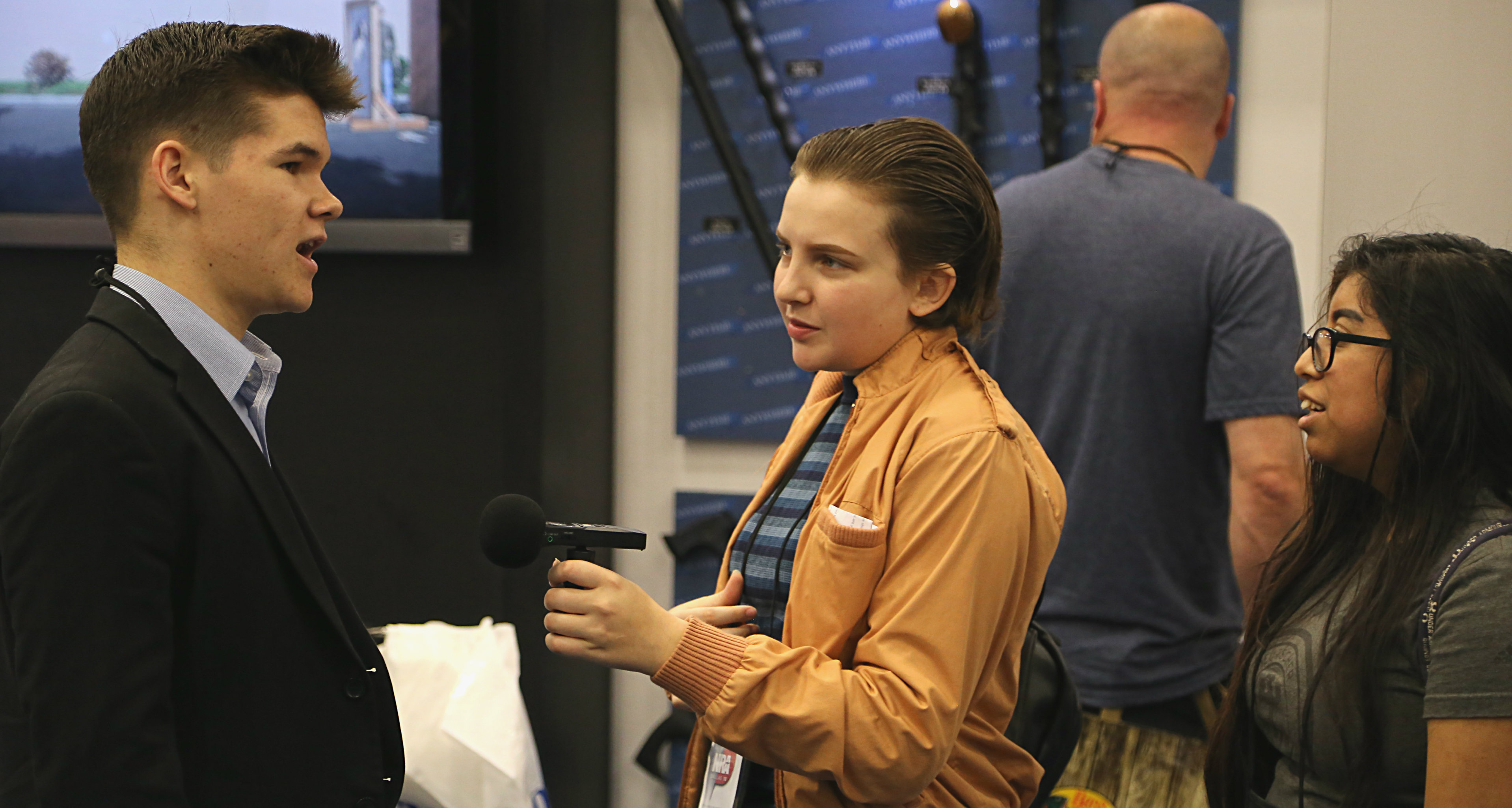 The students expected some resistance. In February, Richards Bim talked to them and their parents about one of the toughest aspects of this project.

“I will tell you it’s been very, very difficult to get gun owners to talk to us,” she said, “because the automatic assumption is we’re going to put something on the stage that makes fun of them or somehow misrepresents their point of view.”

Richards Bim herself is a gun owner. She says she applied for one of the non-profit booths at the convention, hoping to use it to interview NRA members. But her application was eventually denied. Then she decided she’d simply get all of the kids NRA memberships so they could attend. Better to apologize, she says, citing the old saying, than to ask permission. Besides, she points out, they were never given any guidelines or restrictions beforehand about videotaping or interviewing members or vendors.

Before they were kicked out, some of the students saw President Trump’s speech.  They all checked out the acres of merchandise. And they interviewed many visitors and gunsellers. Some said they were actually nervous about meeting the NRA members, but they’d been given a script to follow, so as not to antagonize people.”

“Nice to meet you, my name is Mary Bandy, and this is Regina Juarez. We’re high school students, we’re doing a show about guns and Second Amendment rights. We were just wondering if we could interview you, ask you a couple questions?

“Do you all get a lot of interviews?” asks Juarez.

“So what are you all selling here?” Bandy asks. “It looks really cool.” 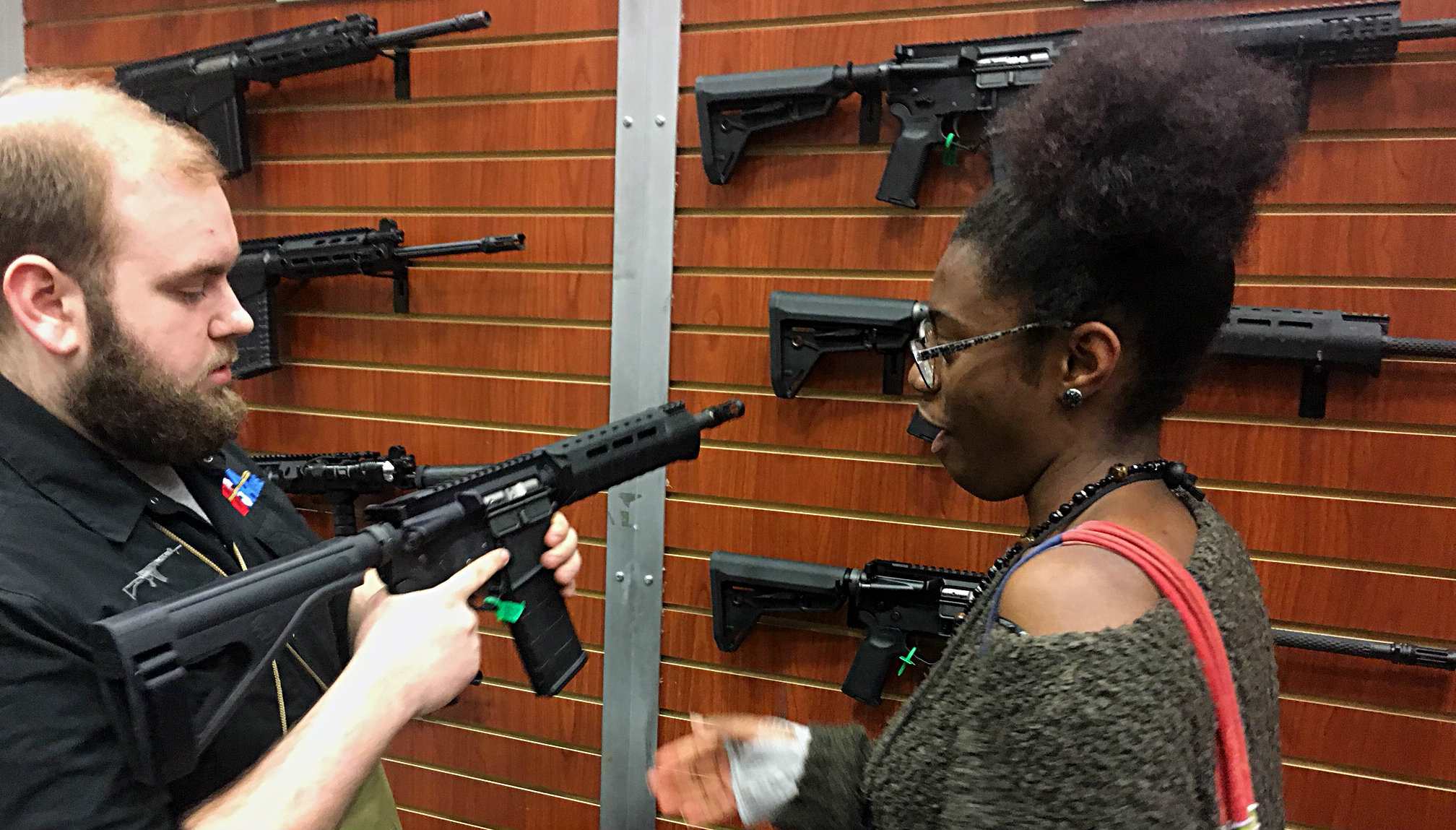 Of course, then the questions Juarez and Bandy asked did get into controversial topics like the AR-15 and student protests. But like many they interviewed, Eric Mattley never objected.

“What are your thoughts on the Parkland students?” Bandy asks, changing topics.

“Oh,” responds Mattly. “This is America. If you believe that strongly in something, you should protest it.”

The students have spent months researching all aspects of the gun debate. They know how polarizing it is. Trinity Gordon from Skyline High wasn’t happy to be kicked out, but she understood.

“Because people already villianize the NRA, they’re scared of their words being misused,” Gordon says. “And he [meaning Charles Brown] didn’t want to be further insulted already, like, in his safe space because that’s what the convention is. So even though he did kick us out and it is kind of wrong, I’m not surprised, and I’m not angry at him for doing what he thought was protecting his right.”

The students met reasonable NRA members but they were also summarily ushered out of the convention for asking questions. The students say they’re still trying to process these experiences.

They have about a month. That’s when they will finish their script, and start rehearsals.