Skip Navigation
Home > ArtandSeek.net > Things Worth Knowing About The Artists In ‘Jackelope’

Hey there Texas Film Fans! “Frame of Mind,” the endeavor of KERA’s Art&Seek and the Video Association of Dallas, is taking a trip back to the mid-1970s this week with independent filmmaker Ken Harrison.

Watch “Jackelope” on “Frame of Mind” Thursday at 10 p.m. on KERA TV

The vehicle for our time travel is Harrison’s documentary “Jackelope,” which provides an up-close look at the contemporary Texas art world through the lens of artists James Surls, George Green, Bob Wade and their colorful friends.

“Jackelope” follows the three artists as they practice their craft, discuss their individual artistic processes and take on the question once asked by Russian writer Leo Tolstoy – “What is art?”

Be prepared for mutton chops, long hair, bell bottoms and far-out art in “Jackelope.” After you watch it, you may want to know more about what’s happened with these wholeheartedly Texas artists since the ’70s. We’ve come up with a list of a few things worth noting.

Where’d Them Boots Come From? 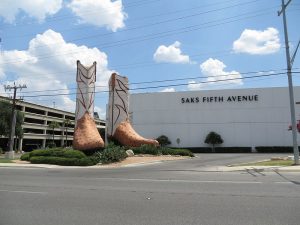 If you’ve traveled around Texas then there’s a pretty good chance that you’ve been through San Antonio. If so, like Pee Wee Herman, you’ve probably made to The Alamo. Maybe you’ve even visited the San Antonio Riverwalk or the McNay Art Museum. But have you ever seen the giant cowboy boots hanging out in front of North Star Mall? According to the book of Guinness World Records, those boots are the “largest cowboy boot sculpture” around and they were created by Bob “Daddy-O” Wade.

In 1978,  Wade found himself in New York with a 40-foot long iguana named the “Lone Star Iguana.” It was built as a temporary installation, but after the exhibition ended Wade had nowhere to put it and he wasn’t going to have it hauled away to the dump. So he called the Lone Star Cafe in Manhattan and it quickly became a staple in the city (thought it moved years later).

The iguana became the envy of other tourist destinations and eventually those cities, such as Washington, DC, came calling. So, Wade created the World’s Largest Cowboy Boots. The boots lived in an empty lot near the White House for about a year. Soon after, the folks from North Star Mall called and said they wanted the boots too. The boots became part of a re-branding campaign for the mall and the Alamo City became their permanent home.

The boots have been part of several celebrations at the mall and once a local radio station hosted a broadcast of their local morning show from within the heal of a boot.

If you’d like to know more about Wade’s “Boots” and the fascination with Texas art during the 1970s check out this video.

Finding A Place To Fit In

Sculptor James Surls has never really fit the “traditional” picture of an artist. Surls is a large man with a booming voice and back in the 1970s, he was usually walking around with a chainsaw or an ax preparing to chop down giant oaks and cedars for an upcoming project. But Surls’ appearance and nontraditional techniques never stopped him from pursuing his creative aspirations and he never wanted other people’s differences to obstruct them from their efforts either.

So, in 1979, while working as a professor at the University of Houston, Surls founded the Lawndale Art Center in an abandoned warehouse that’s located at the edge of today’s Houston’s Museum District. According to the history of the Lawndale Art Center, Surls created an exhibition area within the warehouse and programming soon expanded to explore experimental, alternative works and performances by other artists in the community and beyond. He also got the University of Houston to sponsor the space until mid-’80’s. After losing sponsorship a small group, including Surls, formed a board of directors and shepherded the space into financial independence.

In Lawndale, Houstonians have an institution dedicated to the presentation of contemporary art with an emphasis on work by regional artists. They’ve also rebuilt and expanded the space to include four museum-quality galleries, three artist studios and an outdoor sculpture garden.

If you’d like to learn more about Surls check out the video below. It created by Trine Films and provides an interesting look at the artist as he reflects upon his art many years after “Jackelope.”

George Green, Oak Cliff & The Creation Of An Artist Hub

The Oak Cliff neighborhood in Dallas is heavily associated with the arts and with the artists that have worked there since the 1970s.

One of those artists is George Green. Green, along with fellow artists Jack Mims, Bob Wade and Jim Roche, created Pop Art in the neighborhood during the 1970s and helped to put Dallas on the map in terms of contemporary art.

The crew was called “The Oak Cliff Four” and they garnered national attention for their art from “Newsweek” in 1972. Doing so helped the city’s gallery owners, museum directors, art collectors, critics and the local media come together to support what was being created in the struggling neighborhood. For a moment, Dallas and Oak Cliff became an “arts center.” But that fell apart quickly after the four moved away. Learn more by reading this Art&Seek article from 2013

Art was and still is created in and around the area, but things were never the same after Green and the rest of “The Oak Cliff Four” were gone. Hear Green talk about that moment in time in an interview with “Art After X” below: