In Samantha Mabry’s new novel, a young couple struggles to survive as itinerant farm workers in a post-apocalyptic Texas. Mabry’s an English instructor at El Centro College.  “All The Wind in the World” is her second novel and it was longlisted for a National Book Award in the category of Literature for Young People.

For this week’s State of the Arts conversation, I sat down with Mabry to talk about writing for young adults.   You can click above to listen to our conversation.

A launch party for “All The Wind In The World” will be held Oct. 11 at Interabang books. Details.

The book is set on a fictitious ranch called the Real Marvelous in the real town of Valentine, Texas. Maguey cactus, which is used to make mezcal and tequila, is now the primary crop in the Southwest, and the two main characters hop trains to work in the fields.

Listen to Mabry read the opening passage of her book.

Excerpts from our conversation:

On the big event that’s created this post-apocalpytic world: I haven’t really named it. This is just a gradual unnamed environmental collapse that has caused water to get too salty. Most people are not where the novel is set. You get a sense most people are elsewhere. But there’s this group of hardscrabble people who have found work in this industry.

On the inspiration for the book: Most of all, the place. My husband and I are teachers and so we have summers off and we’re able to spend a month in Marfa every summer. I think it is a really beautiful place that also has a hint of danger to it. You know, there’s burn bans out there. One time, I went on a very short walk and then came back with a heat rash all over my arms. I love the sense of beauty mixed with danger and peril.

And then it was also inspired a lot by that Terrence Malick film, “Days of Heaven,” where it’s also a story about a young couple and migrant workers. I love that movie very much and was trying to take a kernel of that, place it somewhere that  I felt I knew I could write about and I knew had a lot of character itself, and then take it in different directions. 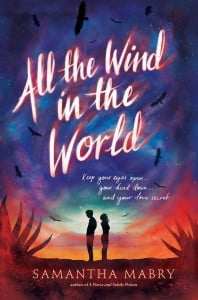 On whether she considers herself a Texas writer: I’ve never thought about it. Someone asked me recently, where did you grow up and did that influence your writing? And I’m like, Dallas? I don’t know. I don’t know if Dallas did.

I’m really concerned with setting. I really love setting. I feel like I need to be familiar enough with a place and I really take a lot of care in trying to capture it well. And so if I’m able to capture Texas well, and someone wants to call me a Texas writer, then  I will take it.

On writing for young adults: The only thing I get really asked to do is to edit for word choice. Like my editor will say, “Teens do not use the word blouse.  They just talk about their shirts.” So sometimes I will get comments that just say, “edit for voice” and then I’ll remember that I have to use a slightly less obscure-ish word and think more in line with what the character would say.

On whether having two successful novels has changed her life: I’ve been able to travel and meet people and talk to people and that has been really rewarding. Other than that, on a day to day basis, I’m still teaching English. But at least I get to say that I did it. My husband tries to remind me of this all the time: “Everybody says they’re going to write a book. And you wrote a book. And then it was published!”

That’s a huge accomplishment. But you’re not quitting your day job?