Your old home movies could make history. The folks at Texas Archive of the Moving Image believe this so strongly that they’re offering to digitize old film and VCR tapes for free. In State of the Arts, I spoke to Caroline Frick, head of the archive, about their latest Film Round Up, happening this weekend in Plano.

People used to joke about being forced to watch their friends home movies. Why are you collecting them?

CFWe all look back and think, “Oh no, Howard wants us to do what?” But here’s what I’d say:  What is YouTube but one big corral of home video? One of the ways that I often have described what we’re trying to do is we’re trying to create a very carefully curated YouTube for Texas.

What we’re trying to say is, if you bring in content, whether it’s already digitized, or whether we’re going to assist you with that, you’re then participating in a brand new media history, a brand new history for the Lone Star State.

You do this through the Texas Film Round Up. You invite people to turn in old home movies, amateur films. You digitize them and give the owner a copy. Is there some urgency around this?

CFYes, oddly enough, the urgency is around video. Film is actually stable long term. Video has a very very short lifespan. The real concern for us now though is that the playback equipment. You’re finding technical obsolescence in terms of playback is just as hazardous as the decomposition of that original material.

So what we’re trying to do is raise awareness not only about the precarity of this kind of content, but we’re also trying to say, remember, this is our history. The history of Texas and media is not just The Searchers and is not just these kind of over the top “There Will Be Blood” kinds of productions. But rather, it is the home movies out of Waco. It’s going to be a corporate PSA produced out of Plano, that are going to tell us who we were and what we were all about. 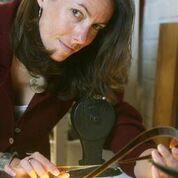 The next Film Roundup is going to be in Plano. And you’ve put out a special call for films that reflect life in the military service.  Why?

CFWe’ve been to San Antonio, El Paso and a number of places that have large military bases and we haven’t had a great turnout. And considering the incredibly vital role that military, and military families, have had in this state, that’s been a real challenge for us. So we were really pleased when we were able to partner with the new North Texas Film Festival in Plano. Their festival is benefiting the really great program of the Veteran’s Institute for Film and Media. And we thought, well, maybe together, we could put out this call.

Your group has a collection of 30,000 films and video. You have a web site and anyone can go there and browse. It just seems like so much material to manage. How do you handle it all?

CF I think the funny thing is the emphasis for us right now, is that we see this short window of time, we see generations passing, and we see those collections being thrown out. We’d rather try to grapple with it and then get that into a place where we can process that material.

Everyone is invited to participate. And in fact, we desire so much to speak to as many people as possible.