Thomas Yu is a 38-year-old periodontist from Calgary, Canada. He’s also the best pianist in the Cliburn’s amateur competition, which ended Saturday. 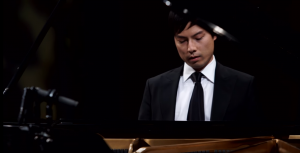 In the final round of the Seventh Cliburn International Amateur Competition, Yu played with the Fort Worth Symphony Orchestra in Bass Performance Hall. He beat out five other finalists to take home the $2000 prize, as well as official guest status at next year’s Van Cliburn International Piano Competition. In addition to taking first place, Yu also won the Audience and Press awards.

While his competitors in the final round performed Mozart and Beethoven, Yu picked a movement by French composer Saint-Saëns to perform with the orchestra, which was conducted by television actor and conductor Damon Gupton.

Yu was a fan of the Cliburn before he was eligible to compete (the minimum age for the amateur competition is 35), so he was thrilled to be able to perform with the Fort Worth Symphony Orchestra, especially since he had seen Gupton on the television show “Suits.” He also says that he had promised his mother, who passed away in the last year, that he would win the Cliburn for her.

“She was the one that drove me to lessons, pushed me to practice and encouraged me to do everything,” says Yu. “And, um, you know, I wanted to make her proud, and just to have these sort of accolades… I know she’s proud of me right now.”

Clark Vann Griffith, a retired database programmer from Fort Worth who spoke with Art&Seek before the competition, took home a special jury award for Outstanding Performance of a Work from the Baroque Era.