Texas-born artist James Surls has been acclaimed as one of America’s great living sculptors.

Want to see James Surls’ work? James Surls: Through the Thorn Tree is on view at Dallas’ Museum of Biblical Art.

On top of that, the 75 year-old is also a founder of Houston’ contemporary art scene. In this week’s State of the Arts discussion, Art&Seek talks with Surls about critics misinterpreting his iconic works (which are colossal pieces of wood and iron that evoke dreamlike plants with eyes and limbs) and what it’ll take to help young artists flourish.

James, your sculptures aren’t easy to describe. They feature eye balls, misplaced limbs, charred exteriors. The only way I can describe them are as characters from some sort of lucid nightmare. What inspires this craziness?

It was about about love light at night. It was about being out in a meadow and looking up at the stars. You know, NIGHT VISION? It was literal. It was named what it was made from.

So I think sometimes that those thoughts – about the work looking like a nightmare – can get eschewed or put into a category that it doesn’t really belong in. But yet, it comes from almost a stereotypical category in society. Society would call it nightmarish. I don’t. So it’s a bit of a predicament.

“Where does it begin? At what point do you say, “It has started”? I think the road to Splendora started when Charmaine and I headed south out of Dallas in 1976. We were on our way to the promised land–Houston, TX. I had my red one-ton Ford and she had three pink suitcases. But together we had forever in our eyes and rhythm in our hearts. We were ready for the big dance; we knew our time was now. Like two birds circling wide around the gulf’s most dynamic center, ever closing in on the right place to start the grand garden.” James Surls, from The Splendora Years: 1977-1997 The land and studio in Splendora, TX are having a rebirth under the care of Jeffery Wheeler of Lubbock, now named Co-Director of the legendary studio compound. Check out the article on @glasstire for more info. #art #artist #sculpture #modernart #sculptor #americanart #texas #jamessurls

We may see them as scary, because they remind us of our dream, which can appear altered and sometimes frightening, but your work doesn’t come from a scary place?

Surls: That’s right. They don’t come from a scary place.

You have several documentaries about you and the creation of your artwork on your website. And in one of them, you said that ‘all art is personal’ and all artwork to be “self-portraiture.” What does that say about your work?

Surls: What I am doing IS personal. It’s very personal. I know you mentioned that I’ve said that and it’s true. Each one of the pieces I work on is about me or about Charmaine or about our kids or about my life. It is about what is in or around or about my center.

I love creating. And I love to create about what is in and about me.

You are known as a founder of Houston’s contemporary arts scene, because you founded the Lawndale Art Center in 1979. Nearly 40 years later, the place is thriving. Can something similar be launched today? Could you see that happening in North Texas? 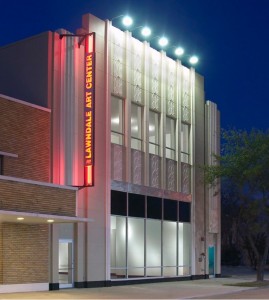 Surls: Yea! I think it can happen anywhere. To be honest with you, I don’t it makes any difference where you are. I think if you have more than three people interested in something you can (by definition) call it a “scene.” (laughs) A scene doesn’t have to be too big. (laughs) We think of art scenes being this very city oriented thing where there are pockets within it that constitutes particular scenes. But yea, it can happen anywhere.

The Lawndale Arts Center lived on – after I went away – because there were great people in the fold. I mean, once you create a race car you don’t have to be the driver all the time. You know? Cause there’s a lot of good people out there who’ve got a lot of good ideas and they want to do a lot of really good things. The opportunity is the flaw.

Dallas and Fort Worth have initiatives aimed at making their cities friendlier towards artists. What do you think those cities can do to nurtures those artists? 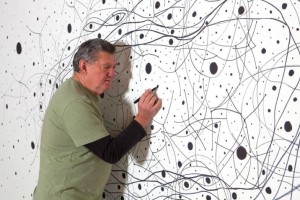 James Surls working on a drawing.

Surls: Give them a place to show. Artists need two things: they need to make their art and they need to show it.

Showing it on the other hand… Where are they going to show their art? Galleries have a pretty tightly woven system. They can’t deal with everybody in town. The museums certainly cant. So I don’t know? I think was really that interested that they would have pocket parks and pocket places where people showed, but i don’t — man, that’s just such a big question.