Former Dallas police officer Amber Guyger is currently appealing her murder conviction in the death of Botham Jean, who was shot in his apartment in 2018. At the same time, TCU is streaming online a new play about that shooting and trial. KERA’s Jerome Weeks sat down with the TCU professor and playwright who’s already won some acclaim for the drama.

Ayvaunn Penn, For Bo, your play, was inspired by the shooting of Botham Jean and the murder trial of Amber Guyger. But given the many shootings of Black people by police the past several years, why were you inspired by this case?

Yes, every Black life that’s unjustly lost is tragic. But being a Dallas native made me feel especially close to the story. You know, ‘Not in my town?’ And also, that Botham was at home made it particularly unnerving. Home was the one place that African-Americans had left that was presumably safe.

Yet Botham was not safe even at home. 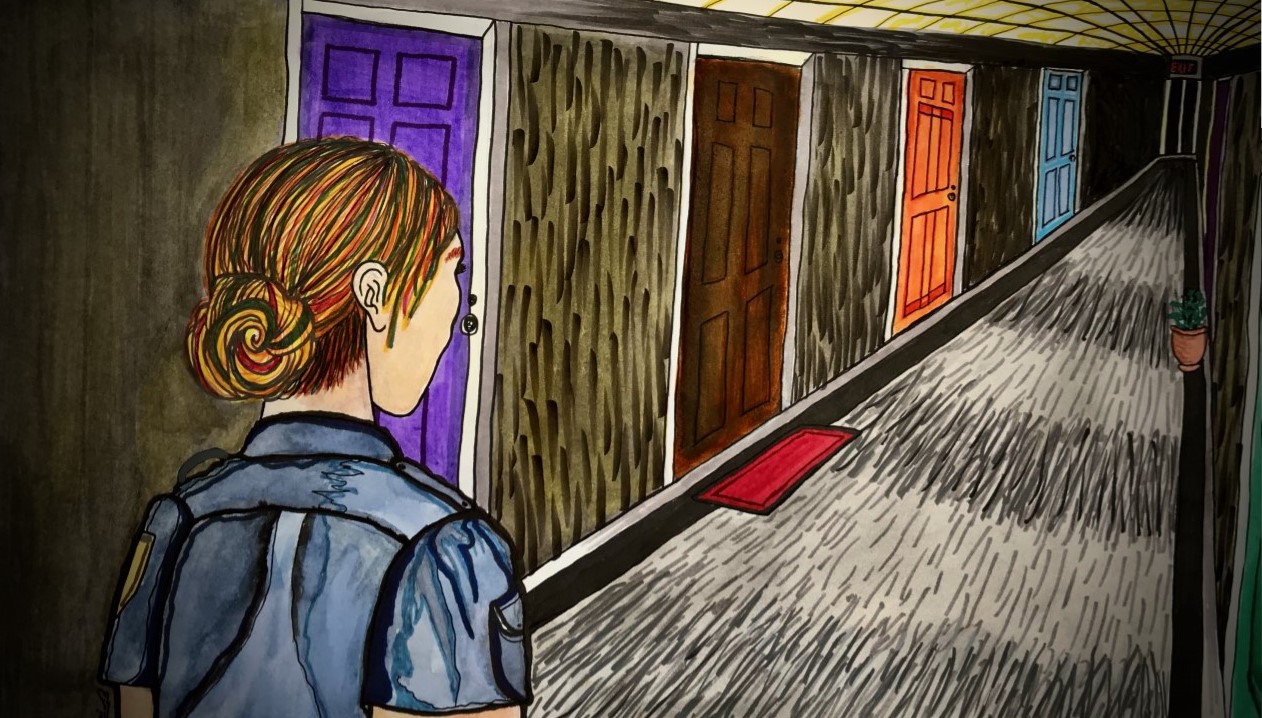 In the play, ‘For Bo,’ Officer Amy Guy is on her cellphone when she becomes confused over which apartment floor she’s on . Artwork: Chloe Bachofen

This is from the opening of For Bo. Amy Guy – the play’s stand-in for Officer Guyger — is on her cellphone. She’s entering what she mistakenly thinks is her apartment.

Someone’s in my apartment.

That doesn’t sound like a typical play. It sounds more like a choral work for multiple voices. Performers chant in a percussive rhythm, sometimes they speak in hip-hop rhymes.

And as an artist, a theater artist, I love large casts, and to have a lot of people together as one, moving as one, there’s something striking about it – for me. 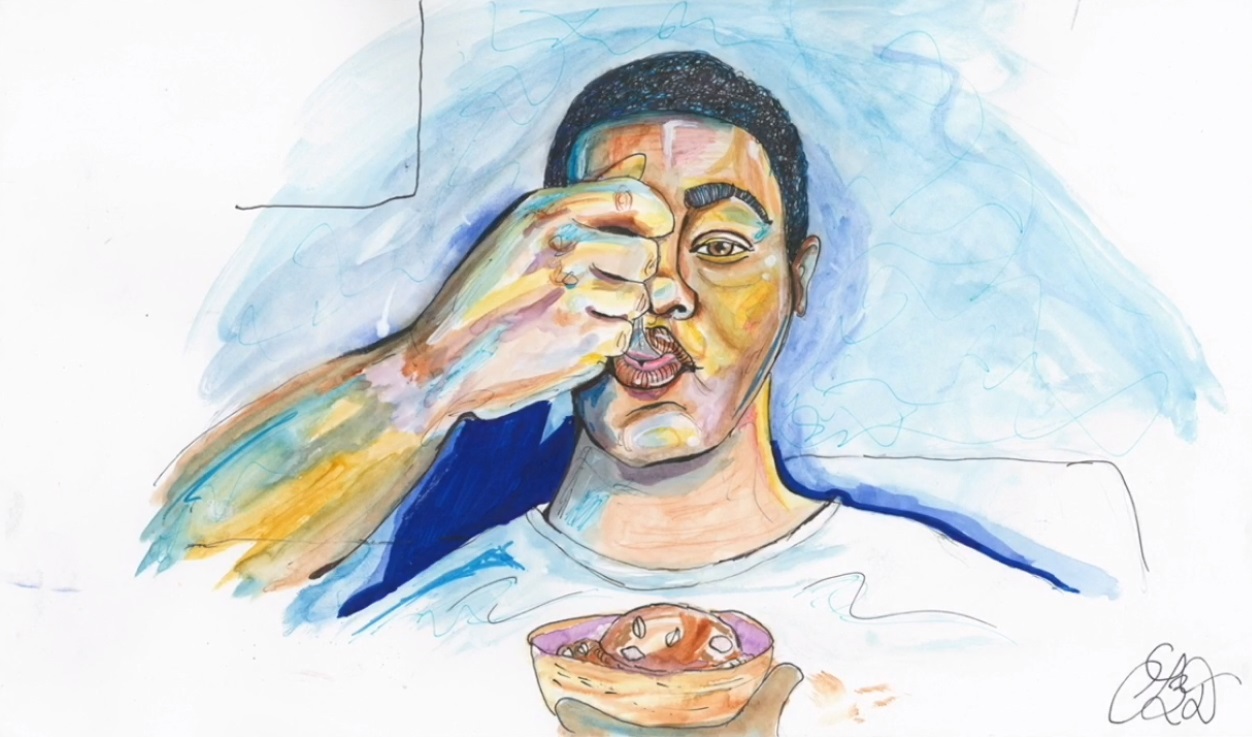 ‘Bo Jones,’ in the play ‘For Bo,’ is eating ice cream when Amy Guy enters his apartment – just as Botham Jean was in real life. Artwork: Brian Dickson.

You had a reading of your play at TCU. Then it became a finalist at the prestigious Eugene O’Neill Theater’s National Playwrights Conference. A more expansive production at TCU was in the works before COVID hit. Hence, the virtual transformation.

But what’s online is not like just a videotaped play. What we watch is more like an elaborately storyboarded script.

Absolutely. This is a stage play that I have adapted into a screenplay. We decided to make this very much a community-involved project. There’s over 200 some images that comprise this. It’s wonderful having illustrations created by our TCU faculty and students, theater members, in addition to the many other educational institutions who have students contributing illustrations.

The shooting, the trial – these are the inevitable dramatic set pieces that you open with. But most of your play actually happens after the shooting and trial. You follow the ramifications in the family and in the larger Black community.

When I set out, I did not want it to just recap what happened but really explore, what are those ramifications? Equal inspiration were the conversations that unfolded afterwards, that community reaction, how it impacts the family.

For many, these characters were just images they saw on a screen, and really finding that humanity within each person – that was so very important to me, all the way around. I worked very hard for this not to be one-sided as well. 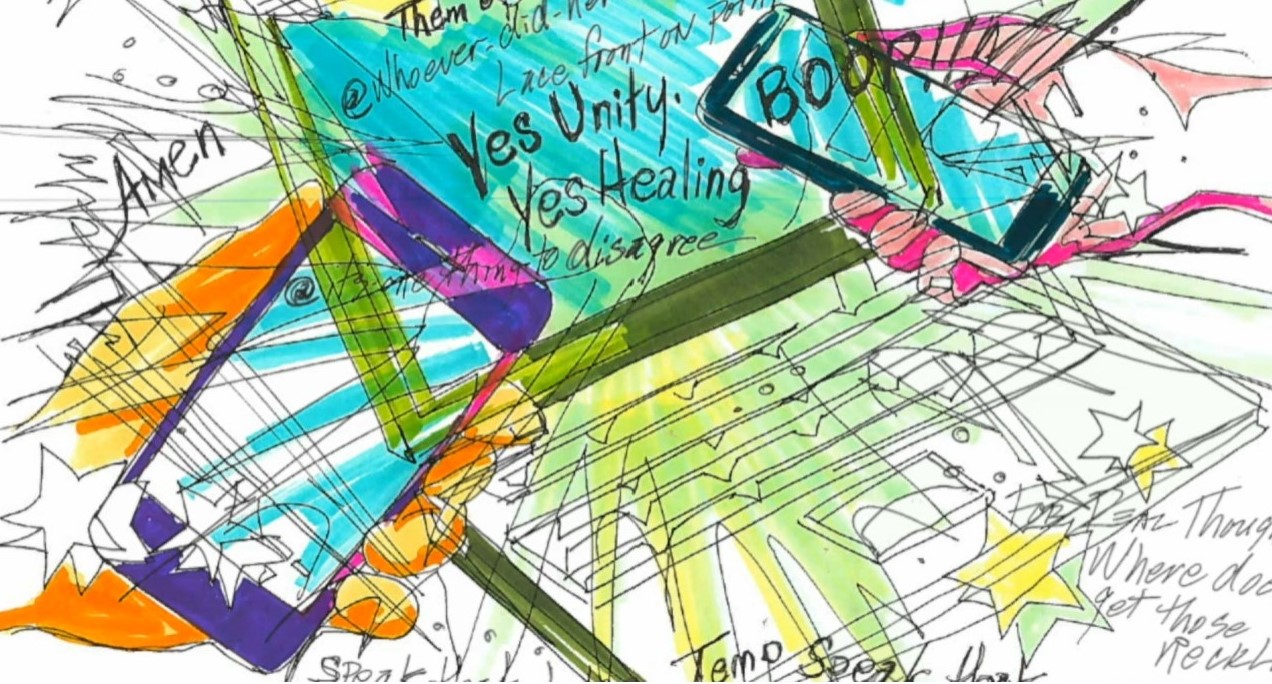 Arguments on social media over the shooting and the murder trial are dramatized in “For Bo.” Artwork: screen capture from “For Bo.”

Your play even captures social media arguments. When a Black female police officer is seen apparently comforting Amy Guy, this is what erupts.

This ain’t no plantation. Why she actin’ like a house slave?

She belong out in the field

Stockholm syndrome – at its finest.

Right. Well, let me let me fill you in on something about the social media: [On stage] those moments were to happen over tap dance numbers, to simulate the tapping of the keys — and bring that good old theater spirit to things. So when we transition to the screen, of course, we simply underscore with typing.

But you are correct, the way the community reacts is immensely important. Not just the use of those outlets, but people also feel a bit emboldened there as well — it’s the watering hole. it’s the salon, it’s the bar where the things get discussed.

If Amber Guyger’s current appeal succeeds and her murder conviction is overturned, would you update or change your play?

I have already, over the course of the writing process, made little nips and tucks. So I think that might be an element as well.

Is there some live, staged production of For Bo being planned for the near future?