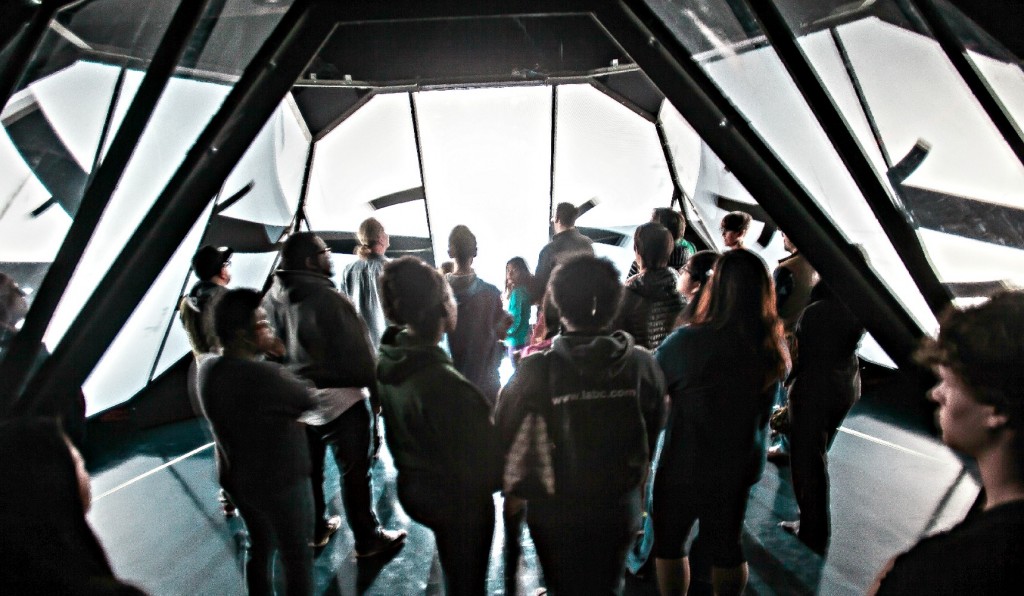 These days, huge black curtains drape off parts of the interior of the Tower Building in Fair Park. They form several rooms that hold what’s described as “an immersive art installation” about a dystopian future. The entire artwork was brought here by SMU (as part of Ignite/Arts Dallas), on a tour by a Detroit art and hip-hop collective. Art & Seek’s Jerome Weeks sat down with Justin Martin to explain what all this means.

The Detroit group called Complex Movements is here because they won the Meadows Prize from SMU, right?

JWYeah.
‘Beware the Dandelions’ continues in the Tower Building at Fair Park through Dec. 5th. Tickets are free but limited — and need to be reserved in advance

JWInstallations are basically just spaces or rooms, sometimes even whole city parks. Inside them, artists can control everything you see, hear or touch. They can mess with your head. Art installations came along decades before theme parks or haunted house attractions but they actually share similar, programmatic ideas. Think of Disneyland’s Futureworld — where you ‘ride into the future.’ All of these are designed to shape your environment to re-shape your thinking. Or just give you a thrill ride. 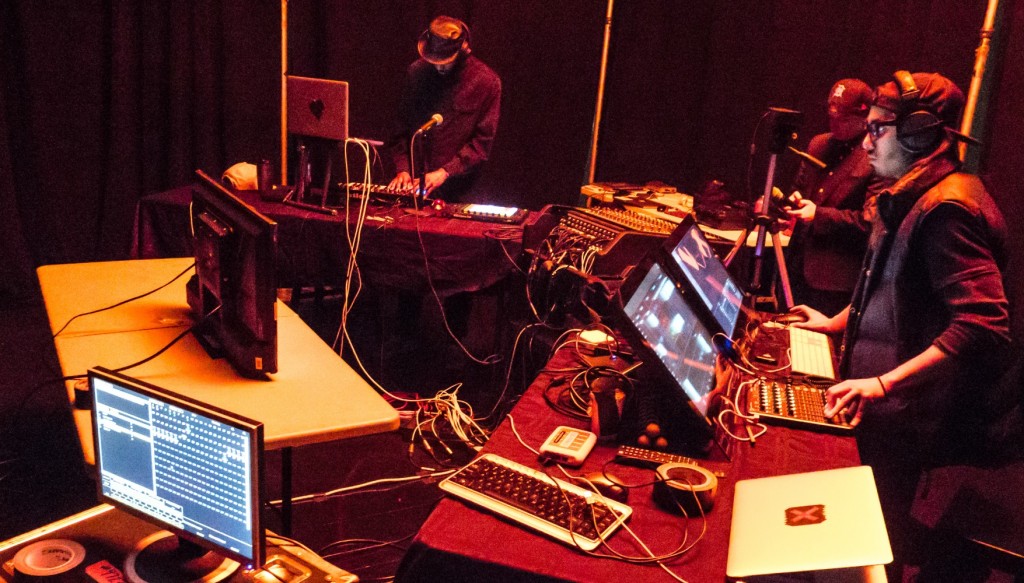 So which is it here?

JWOh, Complex Movements definitely hopes to re-shape our thinking. ‘Beware the Dandelions’ may be a bit like Futureworld in that we supposedly travel to the 25th century, but that’s where the similarities end. The group was partly inspired by the late Grace Lee Boggs, a Chinese-American activist in Detroit, who translated several of Karl Marx’s essays into English for the fist time. In fact, Complex Movements has come to Dallas several times already to meet with local groups like the Fahari Arts Institute at South Dallas Cultural Center. They’re big into community organizing and promoting social justice and political action. They want to extend the cooperative experience or education you get inside the installation, bring it out into a wider community .

And what is that experience?

JWYou first enter a black-curtained space and watch what are basically short science lessons on flat-screen TVs. They’re videos explaining models of collective action and adaptability in nature. Like the murmuration of starlings. Murmuration is the term for how flocks of starlings will fly and spin together; somehow thousands of birds know instantly which way to go.
Then we’re guided down a short hall into the heart of the installation. This is a large, plastic, geodesic pod – it can hold about 25-30 people. We watch videos and graphics projected on the different sides all around us. 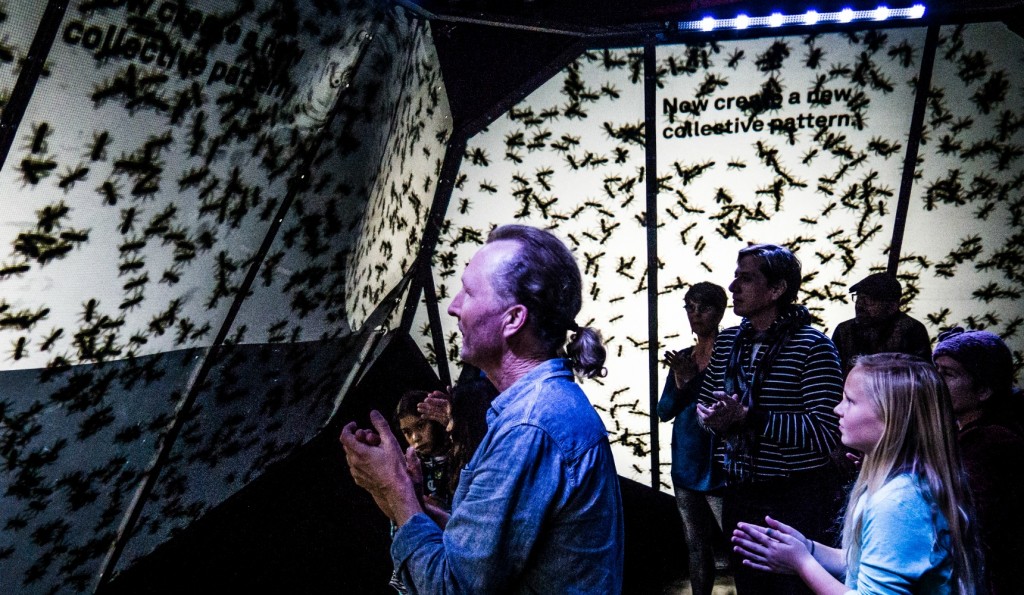 JWYeah, actually, that’s pretty close. And through music and scrolling projections, we’re told we’re in the 25th century. We’ve survived an environmental and social collapse — and there’s a kind of rebellion that’s put down, but we’re seen as the inheritors of all this, the bearers of some collective, ancestral knowledge, going forward, the people who need to act on it.
Detroit – my hometown –invented techno music and it’s become America’s poster child for postindustrial collapse. So it’s no surprise a group of politically-conscious, Detroit artists with a heavy interest in sci-fi might generate something like this. ‘Dandelions’ depicts both a devastated urban landscape and hopes for overcoming it. A guy named Waajeed produced the music and some of it is quite grand. The hip-hop lyrics and metaphors come so thick and fast, though, I could only get a sense of the story, not the many connections being made.
But through all this, the audience doesn’t just stand there. It’s an interactive experience. The story has us clap and move and interact with each other in different patterns inside the pod.

JWExactly. Those first video lessons we saw about collective action and the ways ants or plants survive? ‘Dandelions’ reinforces them through simple, crowd interactions. An enlightened form of ‘Simon Says.’

So what do you think?

JWIf you want to be reductive, you could think of the whole ‘Dandelions’ deal as a small, highly exclusive, pop-up nightclub that presents a hip-hop concert with a killer light show but also a plot and a lecture. And there’s no VIP room and no bar service.
Believe it or not, though, it struck me it’s actually like a post-apocalyptic, hip-hop opera — in a pod. I mean, if Dallas Opera presents ‘Death and the Powers,’ which had singing robots, why isn’t this an ‘immersive opera’? It has arias, plus the set, the music, the videos — they’re all meant to form a single experience, which is very much an operatic ideal. And it has a story, which I admit was too dense for me to follow. But without subtitles I think most people can’t follow Philip Glass’s operas, either.
So I like to think of ‘Beware of the Dandelions’ as a politically didactic, electronic opera presented in a very, very small opera house.

JWYeah, I’m proud of it. 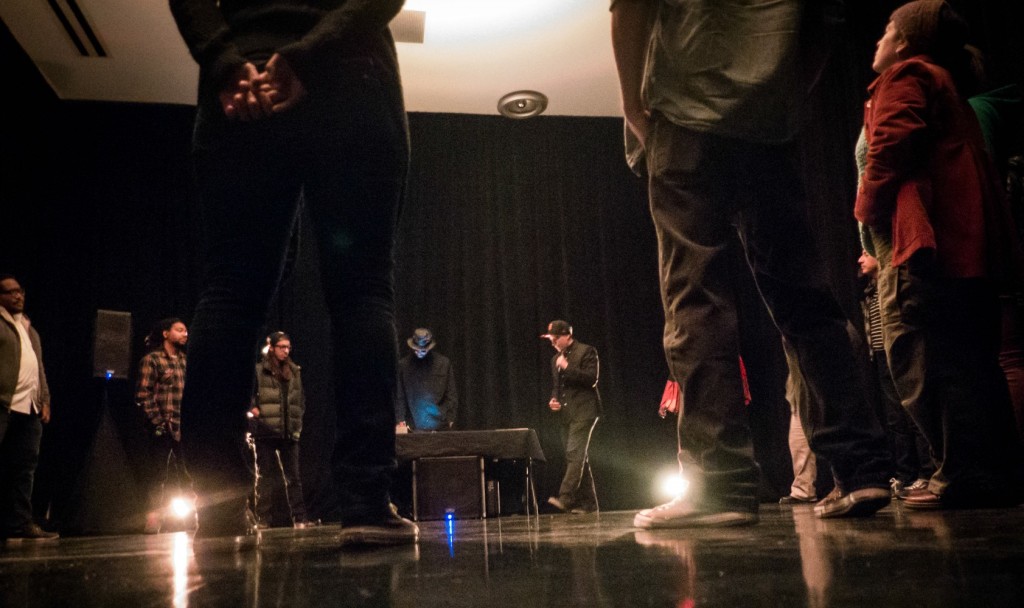 So what else has been happening locally in music?

JWSour notes are coming from the Fort Worth Symphony’s contract negotiations. They began back in June. The symphony’s asking the musicians for a pay cut, and the musicians’ union counters they already took a pay cut back in 2010. So it seems a stalemate. After a concert in Bass Hall last week, several musicians unfurled a banner that said, ‘Growth Not Cuts.” Meaning, in a growing economy, why are their salaries getting cut?
Generally, our classical music scene here has been fairly lucky in dodging the bitter negotiations or even bankruptcies that have crippled other symphonies and operas. Here’s hoping that luck continues.