The nonprofit tasked with building an urban park along the banks of the Trinity River Floodway has acquired more than 4 acres of property needed for the project.

The private donation to the Trinity Park Conservancy completes the boundaries for Harold Simmons Park, which could cover more than 200 acres of land along the floodway when completed. The land at 505 Riverfront, nestled between Woodall Rogers Freeway and I-35E, will be used for the project’s East Overlook feature. 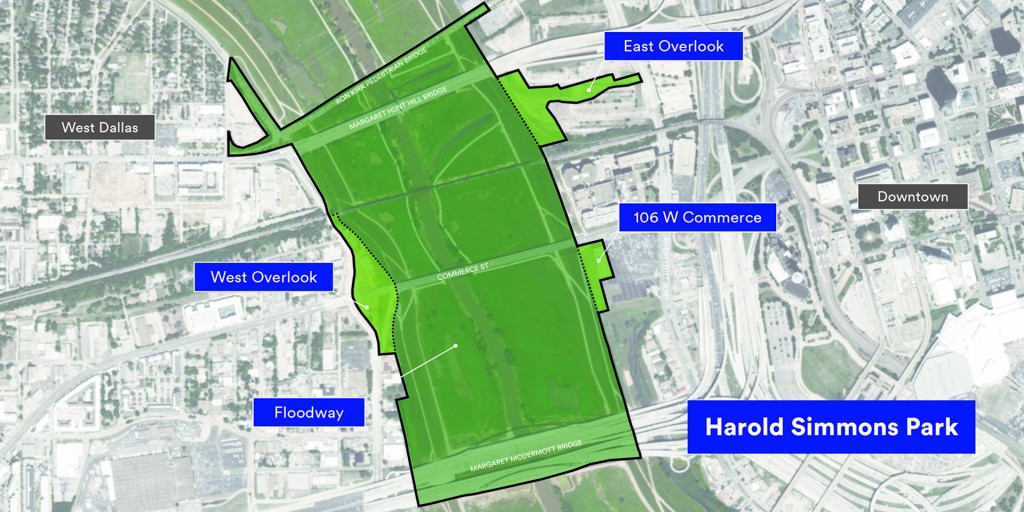 “The addition of this land helps the Conservancy continue the work of bringing a transformational Park to the City of Dallas,” said Walter Elcock, the conservancy’s interim CEO, in a statement. “We are excited to have the opportunity to use this land to create connectivity and visibility to the Park as we turn the under-utilized natural resources of the Trinity River into a great asset for the City and surrounding neighborhoods.”

The conservancy says the large open space is ideal for programming the nonprofit is developing including performances and festivals. 505 Riverfront is also close to the Ron Kirk Bridge, which could provide a pedestrian link to the park’s west side.

Design work on the East Overlook is expected to begin this year, and a groundbreaking could come as early as mid-2022. The U.S. Army Corps of Engineers is currently making improvements to the river levees and other flood risk management work.

The conservancy last August selected Weiss/Manfredi and Malone Maxwell Dennehy as the architects for another of the park’s major features: the redesigned Jesse R. Dawson State Jail. The renovated building will serve as a gateway to the park.