The next generation of American Theater has arrived. And it rocks. Literally.

“We’re Gonna Die” is being performed on Friday June 2nd at The Wild Detectives bookstore. Get event details here.

Lee’s show centers around the life and experiences of one character called “The Singer.” This character shares anecdotes from her life – the loss of her father, a tumultuous breakup and even examples of school yard humiliations.  After each story, “The Singer” performs a song with her band. The songs are catchy and soothing, almost like indie-rock lullabies, despite featuring lyrics like, “When you get old all your friends will die! And you will be a burden to the world!”

“We’re Gonna Die” is in the midst of a regional premiere with shows in Denton, Dallas and Fort Worth. Joining me to discuss the North Texas production is local musician and actress Sammy “Rat” Rios and director and producer Jake Nice. 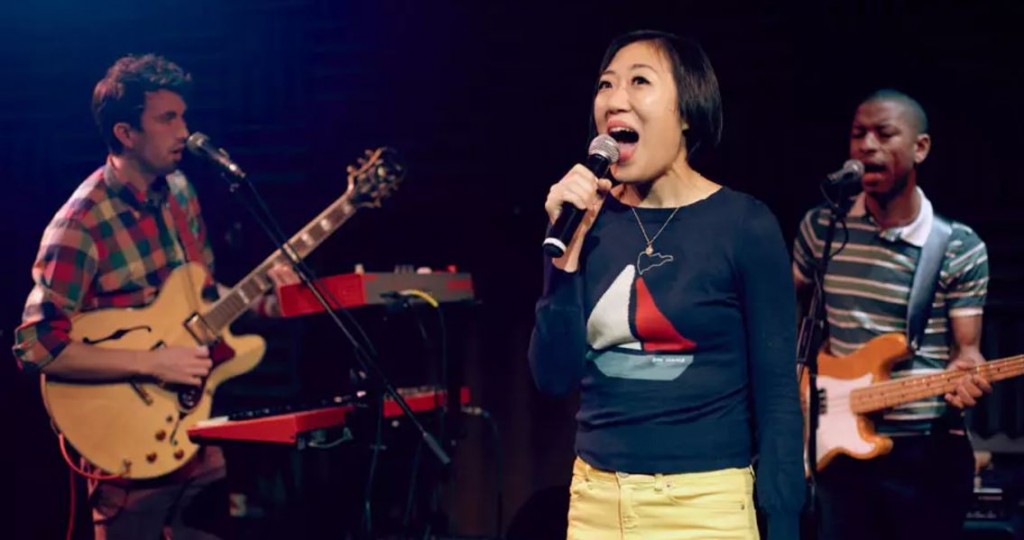 Click the photo above to watch Young Jean Lee’s 2011 performance.

Before we get started talking about this show, can we talk about this title? “We’re Gonna Die” sounds very dramatic. Are audiences signing up for a really sad experience?

JNI don’t think that it’s necessarily a really sad play. I think that a lot of the charm of the play is that it sounds kind of ominous. I mean, you’re going to see a play called “We’re Gonna Die” and that can be a really hard thing to come to grips with. But I think the point of the play or what happens throughout the play is sort of about accepting that (we’re gonna die) and accepting that there are horrible things like death and dying and pain that everyone has to deal with all of the time, but that you’re not alone with that. The audience members and the characters in the play are experiencing those things with you at the same time.

Well, good. I didn’t want to scare people away from the jump because of the title. Jake, can you tell us a little bit about “We’re Gonna Die?” What’s it about? And what makes the performance unique?

JNWhat really drew me to this play is that it really doesn’t seem like a play at all. When you’re reading it, it almost comes off as stand-up comedy or like a sermon. I’ve used the phrase secular sermon to describe it. Not that it’s super preachy or it tries to tell you how to live your life, but it’s trying to relate to it’s audience. It’s very unadorned. It has a very simple performative aesthetic. And I think that makes it really accessible. But I definitely agree with your description. It’s half rock concert and you have these monologues that are interwoven throughout the play that the singer and her indie rock band perform throughout the play. 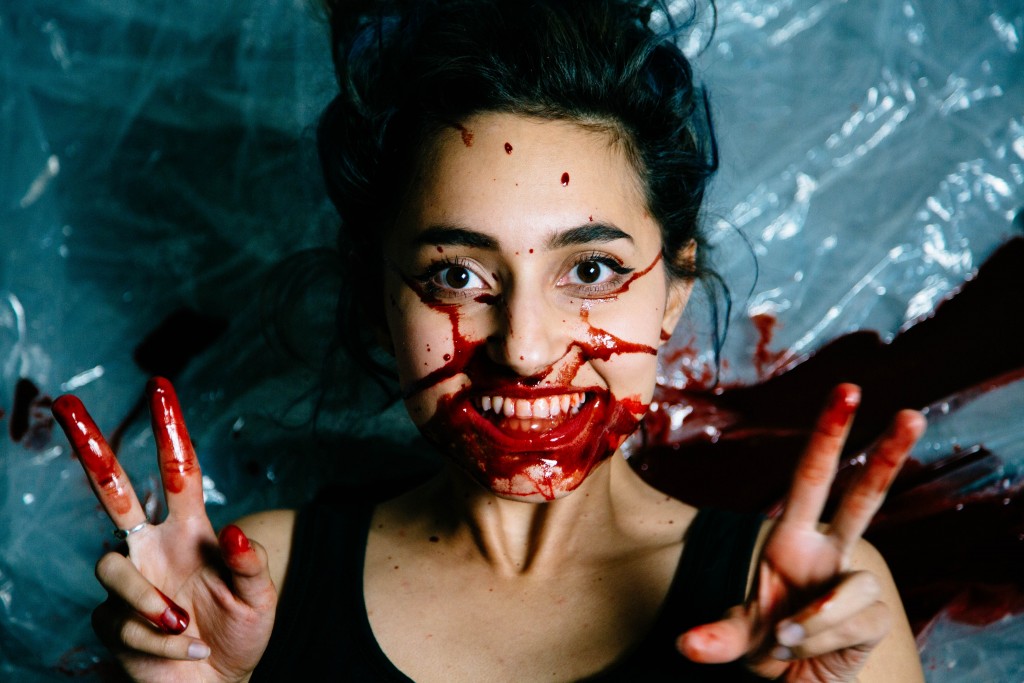 Perhaps we should speak with “the singer?” Sammy, you’re the show’s lead – “the singer.” Can you explain how you take us from point A to point B in this play and tell us what attracted you to this role?

SRSo the play consist of me telling anecdotes from different periods of my life, specifically periods where I’ve experience pain. And I do it in a relatable and really accessible way. And as the play progresses, I usually go into a song interlude and sing a song about that expedience.

The great thing about this show is that theater goers and concert goers can both easily tap into this show. And that’s kind of why I really wanted to do this role, because I know a lot of local musicians who don’t see theater and vice versa. But this brings together different communities that can all relate over the same thing – death. Which by the way is not a horrible thing. It’s wonderful. We know we’re going to die the second that we’re born and so if we approach it in a calm and aware manner than everything will be fine. And I think that’s the premise of this play – it’s going to be fine.

Is that what attracted you to this show? Besides crossing genres between theater and live music, did you want to show people that we didn’t need to fear death?

SRAbsolutely. I’ve always had an affinity for the dark. And though this might be perceived as “dark” – especially from the surface. But if you actually take the time to read the play or to experience it, you’ll see that it’s not. It’s beautiful.

Where did the idea to bring “We’re Gonna Die” to North Texas originate?

JNI found “We’re Gonna Die” while working on another Young Jean Lee play called “Straight White Men.” I think I’ve been really searching for something that was non-theatrical and in many ways this play is not a play at all. We haven’t even been calling it a play. We’ve been calling it a theatrical experience.

Anyway, picking up on what Sammy was saying, I have a lot of friends that are interested in theater but it seemed as though they were looking for something different. And I think this play is new and different without trying too hard. It really is a simple sort of performative evening. And I really thought that if we brought together some really terrific bands to be a part of this production that we were really going to be creating a really special event that all sorts of people would be interested in wanting to see.

And in fact, it’s almost been a sort of “one night only” sort of event, because we’re only doing four performances and each performance is performed with a unique band in a new location. And that’s been great. We’ve had lots people who’ve wanted to see the show over and over again at each location and they have plans to see the third and fourth performances too. 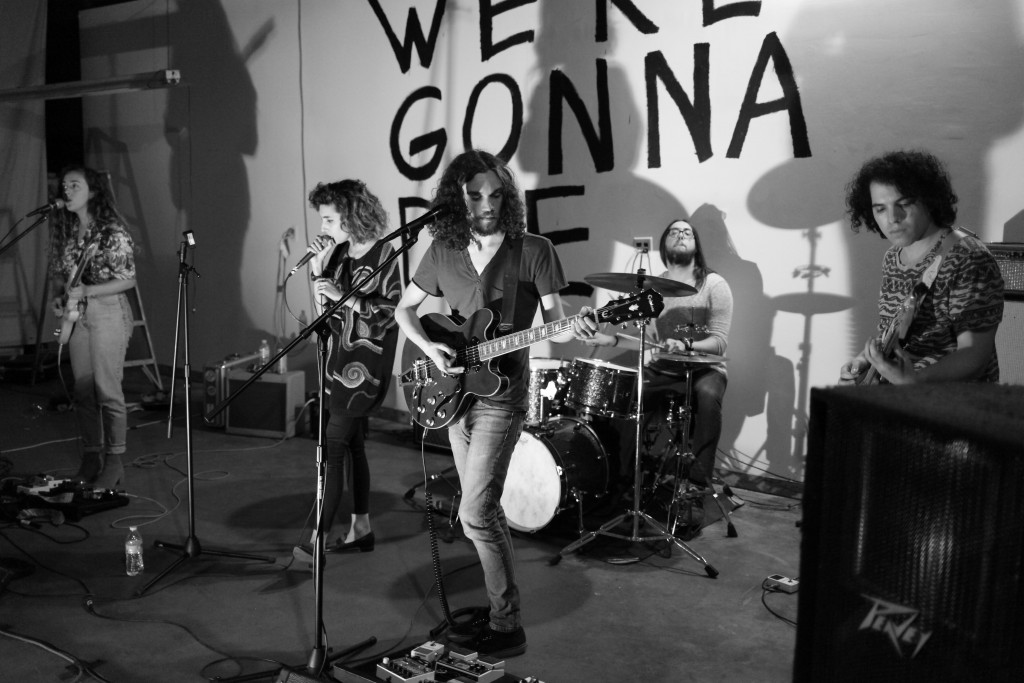 Sammy, you’re on stage and experiencing the audience from a completely unique vantage point. I wonder how the audience is reacting to this show? You’ve performed in an art gallery in Denton and at Dallas’ Second Thought. How are they taking in the show?

SROh Gosh. Both performances have been completely different in vastly different ways. The first performance was in a formal theater space and people were sitting and I did feel like there was this wall that I couldn’t cross because I was in a theater. And the Denton performance was immersive. The energy was different. They were both wonderful, but that’s the charm of this production – each show will be completely different. Like the show we have at The Wild Detectives, I presume will be totally different than the show in Denton or the show we have in Fort Worth. And that’s exciting! It gives me a chance to practice what I am preaching and to live in the moment and know that everything is going to be okay.

The stories that are shared in this production are very real seeming. They’re honest, brutal and haunting. But once you get past all of the realness, you’re confronted with a hopefulness. Sammy, can you tell us what the post-show experience has been like? Does the audience think that this show is full of your own stories?

SREven though the program says that this show is written by someone else, the audience members are very hesitant to come up to me after the show. They’re often like, ‘I’m so sorry that this has happened to you and that you’ve gone through this.’ And I have to remind them that the stories aren’t mine. But I thank them. I appreciate that they care. 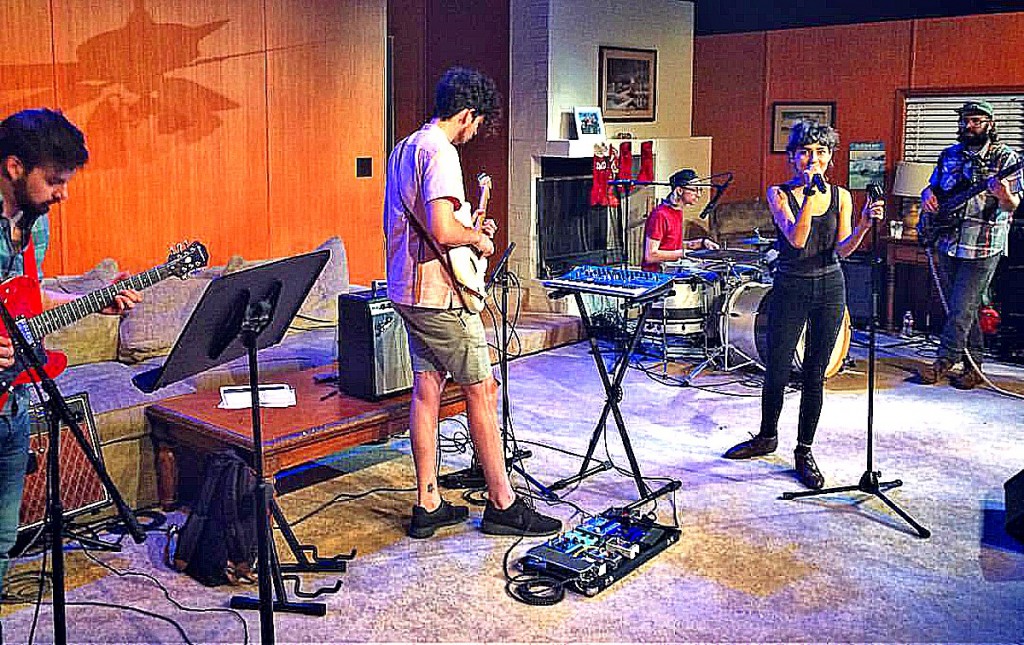 Jake, how did you know that Sammy was the right actress to take on this role?

JNI think the first thing that made me think of Sammy was the combo of music and theater. I mean, I thought about who I knew that could lead a band and who had a powerful stage presence and who I would want to listen to for an hour and Sammy came to mind. And when I approached her about it, she had a lot of ideas and interest in the show and that’s been an important part of this whole process. Sammy had ideas for who should be in the band and having someone as plugged into the network as she is has obviously been very beneficial.

Sammy you’re performing with “the band,” but it’s not a real band. The band changes every performance and the players aren’t even used to playing with one another because each member is part of another band. What’s it like to be plugging yourself into each group?

SRI have met so many incredible people in the North Texas music scene who are open to different outlets of expression, but who haven’t done it yet. And I love that get to have someone who plays in a folk band playing alongside someone from a heavy metal band and create this new music. It’s great. It is just such a unique dynamic.