Skip Navigation
Home > ArtandSeek.net > What Does It Mean To Be Visible? Find Out For Yourself At Exhibition Of 17 Asian And AAPI Artists

Ro2 gallery in Dallas is currently featuring an exhibition inspired by the rise in anti-Asian hate crimes and the Atlanta shootings.

Trading hashtags and tweets for brushes, thread and clay, the exhibition creates room for a dialogue instead of pushing a single point of view. While the artists’ cultural backgrounds significantly influence their work, they’re not wholly defined by their Asian or Asian Americanness. Other experiences float to the surface as the richness of their identities — artist, immigrant, parent, educator, feminist — are given a platform.

Visible will be open to the public at Ro2 gallery through August 14. You can find more information here.

Meet four of the 17 artists who have work featured in the exhibition: 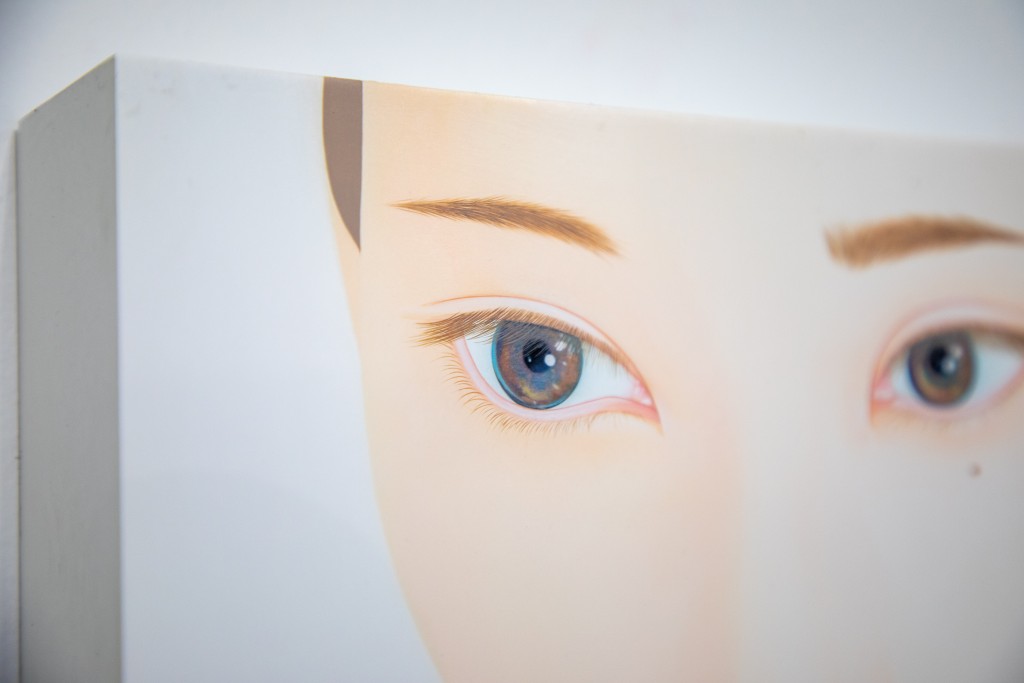 The buttery glow of Yasuyo Maruyama’s Kahoko 3 draws viewers in with the subject’s impossibly smooth, porcelain skin. Beckoning viewers to reach out and touch it, the portrait’s flawless finish is created through the laborious process of brushing on dozens of thin layers of oil paint, which each take a day to dry. Maruyama says the smooth surface allowed her to use precise brushstrokes for delicate features like strands of hair, eyelashes and the focal point of her portraits: the eyes.

“They’re the windows to the soul,” she said. “The painting doesn’t move, but the eyes are living. It doesn’t speak but it speaks to the person looking at the painting.”

Maruyama, who identifies as Japanese, drew inspiration for the detailed, orb-like eyes from Japanese manga or graphic novels like Sailor Moon. The painter also draws from her challenges with severe eczema in high school — which inspired her fascination with skin that’s evident in the immaculate complexions she paints.

“It’s like makeup, trying to be what I want to be,” she said. 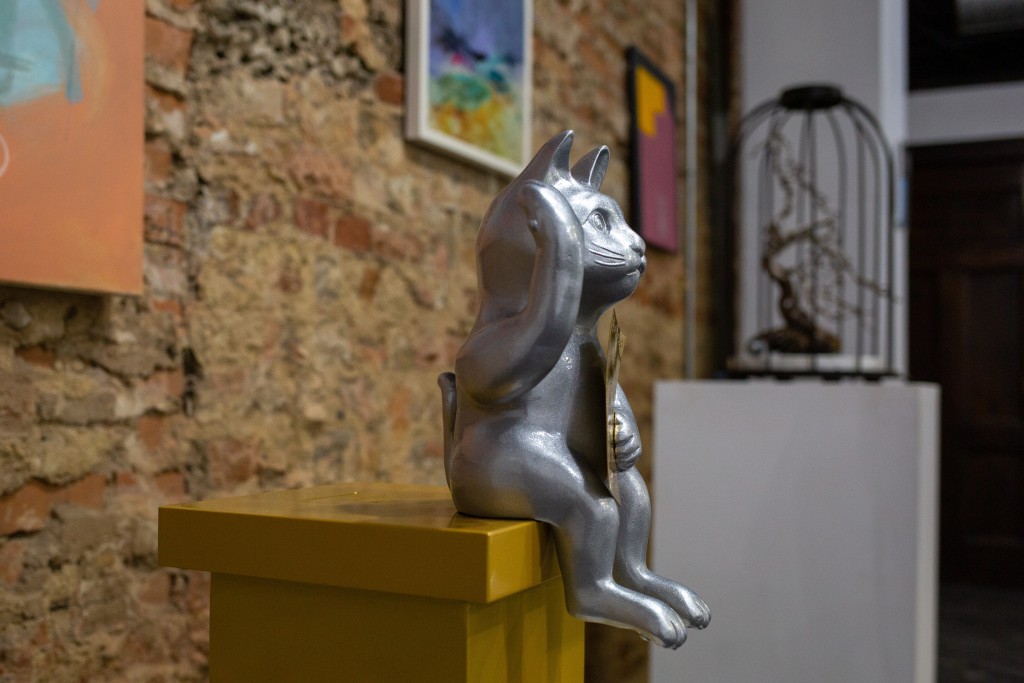 Suguru Hiraide’s Maneki Cat is a kinetic sculpture with a right arm that swings back and forth. Photo Credit: Keren Carrión/KERA.

In front of the opposing wall of the gallery, Japanese American artist Suguru Hiraide’s kinetic sculpture Maneki Cat greets viewers with a soft squeaking sound as its right arm waves at passerby. For some visitors, it may look familiar. Similar “beckoning cat” figurines can be found at many Asian restaurants in the U.S.

While the traditional Maneki cat waves with its palm facing forward, Hiraide said he decided to westernize the piece by turning the palm inwards  — the way Americans wave their hands to beckon. It’s a subtle change, but a meaningful one.

“I wanted to add a little bit of playfulness and also humor to my work,” he said.

Triggered by a motion sensor, the sculpture is one of the interactive pieces in the exhibition. It encourages viewers to not only approach it physically from different angles, but to consider different points of view.

“I’d like to look at the piece from both sides, for example as an Asian point of view. Also I think about if somebody looked at this as a Western or American point of view, how they will probably look at them.” 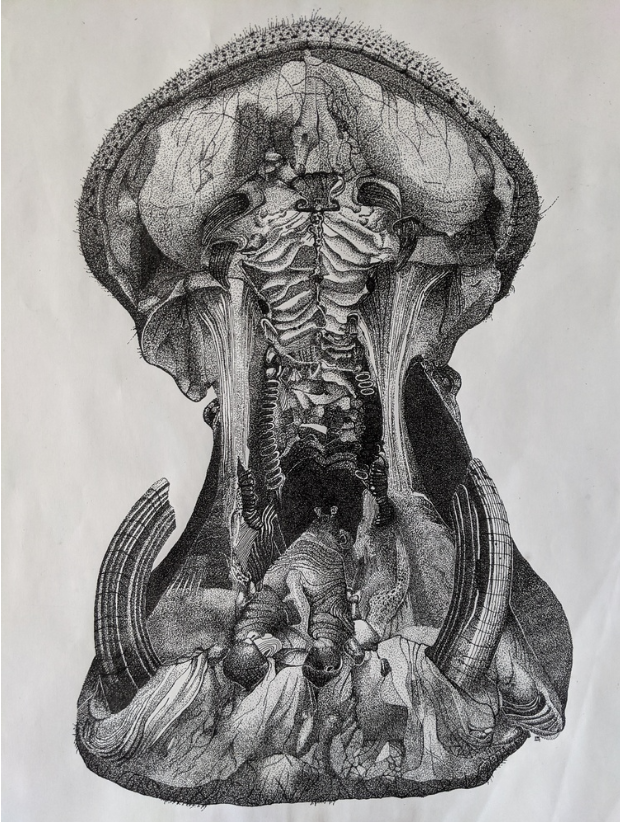 The exhibition also features drawings by Sri Lankan artist DJ Perera who has labeled each of his pieces by the number of hours — 117; 72; 62; 39 —  that each piece took to complete.

Putting ballpoint pen to paper, Perera uses a technique known as pointillism that involves layering a collection of small dots. He said his work is more about holding onto his identity than making a political statement — it’s about the universal experience of straddling different cultures.

72 Hours depicts the inside of a hippopotamus mouth with incredible texture and depth. From the ruffled roof of its mouth to its large incisors, layer after layer of imperceptible dots merge together.

Perera, who once worked at the United Nations, said art is one of the few universal mediums that connects people regardless of their background. On social media, he said it’s hard to have a civil discourse. But in an art gallery?

“There is an opportunity to meet people from different backgrounds and to have a discourse and extend that conversation into the art,” he said. 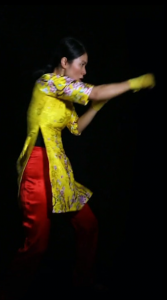 For multidisciplinary artist Anh-Thuý Nguyễn, her video Thuy & T featured near the gallery’s front door represents her internal struggle as a Vietnamese American woman, artist and mother, and the cultural expectation that weighs on her.

Wearing a traditional Vietnamese dress or áo dài, she boxes alone in front of a pitch black backdrop. She staggers her feet while swiftly punching forward, looking ahead with determination and a glint in her eyes.

Nguyen notes the “awkwardness” of boxing in her áo dài, in which Vietnamese women are expected to be delicate and controlled. The elegance of the traditional dress is a stark contrast with the brash movement and sweaty physicality of her boxing as she metaphorically fights to step out of cultural and gender norms.

“The dress is how we’re supposed to elevate the beauty of women, but at the same time I feel it’s molding how an ideal women is supposed to look like,” she said. “It’s like endless fighting that we have being female, a woman, a human being.”

What some people might not know: Nguyễn filmed the video before and after the Atlanta shootings in March when a man targeted women of Asian descent killing eight people. She said performing the piece the day after the shootings, a lot was going on in her mind and there was a different weight to her punches.

“It’s added another layer of how I feel like it’s such a burden, not just being a human generally or female,” she said. “Being the way I look in the context of the America in this landscape or like if I go outside like am I safe?”

But the artist is adamant that the piece isn’t about anti-Asian hate. Instead, she said it’s about the universal fight to survive.

Nguyễn said she knows her existence as a Vietnamese American woman has been politicized. She can’t change her East Asian appearance, the way she speaks with an accent and the food she eats — but, the artist says her work goes beyond her individual experience. Ultimately, the artist said she aims to reflect universal themes that connect viewers.

“My intention is to kind of celebrate the differences, but at the same time allow space for the viewer or a different group of audience to join together and find the common thread of us being a human.”