Skip Navigation
Home > ArtandSeek.net > Who Are The Amateurs At The Cliburn Competition?

All week long, we’ve been reporting on The Cliburn Amateur Competition in Fort Worth.

The Semifinals of The Cliburn Amateur Competition begins Thursday. The Finals will be held on Saturday at the Bass Performance Hall

Late this evening, we’ll find out who will make it to the semifinals. [We’ll post the results here when we get them.] The competitors all have day jobs, but they also have a passion for piano. So we went down to the competition chat with a few of the folks vying for the top prize and learned that it takes countless hours of practice to call yourself a Cliburn amateur.

For a professional pianist it’s common to travel the globe performing in beautiful performance halls like Bridgewater Hall or the Berliner Philharmonie.

And it’s even easier if you can play like the man in video below. But that man isn’t a professional. That’s Jorge Zamora, an amateur contestant at the Cliburn Amateur Competition, and he’s traveled from Mexico City to perform in Fort Worth this week.

Zamora says the word can be used disparagingly, but that perhaps it shouldn’t be. “The word amateur in Portuguese is called “amador,” says Zamora, “and [amador]  means someone who loves. So the people who are here are music lovers and they have to play.”

The Cliburn’s amateur contest was created to help spread a love for classical piano music and Zamora –who had stopped performing to focus on his career – is exactly the sort of person they were targeting.

“I started to be self conscience about playing in public,” says Zamora, “When I realized 10 years had passed, I found out that I could enter the 2011 Van Cliburn Amateur Piano Competition and that’s when I started to perform again in public.”

Jacques Marquis, The Cliburn’s CEO, believes that the contest can bring piano lovers back to the keys.

“They are doctors, lawyers, engineers, mothers at home and they love the music, they love the piano. And, they decided to participate because they have a desire of sharing the music,” says Marquis. 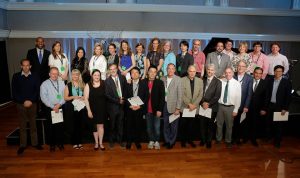 A photo of some the contestants that made it into the quarterfinals of the competition.
Photo: The Cliburn

Pianist Yumi Ahn is an attorney in Singapore. But she started playing piano when she was five and trained intensely until she was 19. She says she was determined to be a soloist, but quit.

“I just didn’t think it was worth that much investment at the time, so my life sort of changed forever after that,” says Ahn.

Ahn stopped playing and focused on her legal career, but she says some late-night TV surfing brought her back to the piano.

“And, I didn’t know these amateur competitions exist, you know? Until, I watched this documentary ‘They Came To Play.’ It was just a random coincidence. Just going through stuff on Apple TV and so I was like, “okay, it’s probably meant to be, so I am going to do it.”

Ahn isn’t the only contestant back from hiatus. Coleen Adent a stay-at-home mom from Vancouver, Washington also had ambitions of being a soloist. She shelved those dreams to have a family and raise her kids. Now, she’s ready to return to the stage and show off her stuff.

“I really want to play in a way that, that might just reach inside somebody and kind of tug at a place that they haven’t had tugged before,” says Adent.

Zamora believes the contestants’ passion resonates with the audience, “I believe that when you see someone doing something for real pleasure and for real excitement, it means something else.”

“They have a great advantage over professionals in that they can be much, much more adventurous in what they perform,” says Gay, “They don’t have to worry about ticket sales. They play what they want to. They can play the very familiar. If they’ve always dreamed of playing Chopin Ballade Number Three, they can do it.”

Gay says the competitors are playing the music they love.

Ken Iisaka, a software engineer from California, is a perfect example of someone hoping to perform the music he loves.

Iisaka thinks classical music is one of humanity’s greatest achievements and win or lose he’s delighted to play his phrase.

The final round of The Cliburn Amateur Competition will take place on Saturday. Finalists will perform with the Fort Worth Symphony Orchestra at Bass Performance Hall.