Skip Navigation
Home > ArtandSeek.net > Why TACA’s 41 Arts Grants Are Smaller This Year, And What’s Next

The arts funding group TACA handed out its annual grants at an elegant cocktail party this week.   But the 41 theaters, orchestras and dance troupes picking up their checks found them smaller this year.   The total amount TACA gave away plunged more than 40 percent from last year. Wolford McCue is the president and executive director of TACA.  I talked to him about what happened, and one step the group is taking to fix this.

You can click above to listen to the conversation that aired on KERA FM. Here are some highlights:

Well, the last three years, we haven’t really raised the money that we distributed. We had a surplus fund from a number of  years ago that we drew upon, and so that really helped with a gap. And secondly, the last three years, when we realized we were going to be short, we went back and banged on the doors of contributors. And we realize that’s really not a model that’s sustainable. 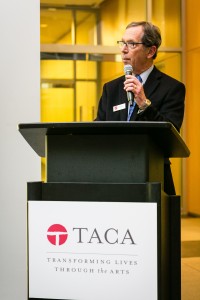 TACA has been around for 50 years.  And you have some groups that really rely, year after year, on your funding. When and how did they hear that this year, they were likely going to be getting less?

The last couple months of the year, when we were doing projections, it became evident that there was going to be a gap. I sat down with the executive directors of all the organizations in small meetings, and it was as much to help them understand why, but also to give them a heads up, because while our grants are not guaranteed from year to year, there is some expectation. And so, I wanted to give them as fair warning as possible.

What’s the reaction been?

It’s interesting, you mentioned that we’ve been around for 50 years. The reality is we’ve been working with a business model that we really haven’t changed a whole lot in 50 years. And it caught up with us. And whether you’re a business or you’re a governmental body or a not-for-profit organization, if you aren’t paying attention to external forces and responding to them, you’re going to pay a price.

What were those external forces?

What are some the new approaches that you are going to take to raise money?

Well, we’re going to reduce the number of events that we annually have, go from three to two. And then rather than go to corporations and ask them for more dollars to support the arts, we recognize that we would only be competing with the organizations that we fund.

From our standpoint, we realize revenue, because the corporations are paying a fee for each one of those people. But we aren’t disturbing the money that our organizations get from sponsorships.

At the same time, we’re developing relationships with young people and giving them a perspective on the arts that we think will have an impact long term.

That’s helping your organization, but also the organizations that you serve, who are all looking to attract millennials to their audiences.

That’s right. And one of the things, when you study millennials that they are very interested in is to be very involved with the community in a meaningful way and that last clause is really important. They don’t want to come in and stuff envelopes for a fund-raiser.

We’ve asked our organizations to identify small projects where they need help. It may be development of a financial plan, or helping them develop a marketing strategy. And we’ve matched those needs of our organizations up with the talent of the corporate employees in TACA 360, so the millennial employees are doing  something that is really, really meaningful and helpful, and our organizations, it helps them with capacity building.