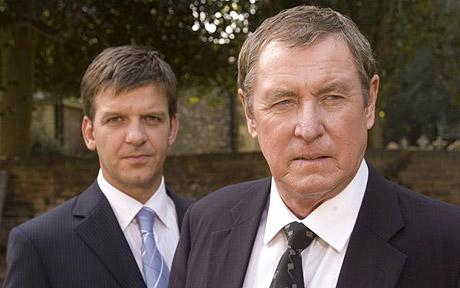 40 years ago this October in 1974, KERA premiered Monty Python’s Flying Circus to the delight of a majority of North Texas viewers. Ever since, KERA has been home to the best British television in both the comedy and drama genres. From a drama standpoint, most recently, KERA viewers have shook their fist at the curmudgeonly Dr. Martin Ellingham on Doc Martin, attempted to solve case after case alongside such notable detectives as Sherlock Holmes, Hercule Poirot, Miss Marple, Inspector Lewis, George Gently and DCI Banks and lived on the grid with Harry Pearce in MI5. Some of the best and most notable super sleuths have called KERA home season after season. We haven’t even touched on the fact that KERA is home to the likes of Call the Midwife, Mr. Selfridge, Last Tango in Halifax, Endeavour  and that little series we affectionately call Downton Abbey.

Beginning this Thursday, June 12 at 7:00pm, KERA will add a new long-running British police drama to the mix with the premiere of Midsomer Murders. Written by Anthony Horowitz (creator/writer of Foyle’s War) and starring John Nettles as DCI Tom Barnaby and Daniel Casey as DS Gavin Troy. The series will run on Thursdays at 8:00pm but will kick off with a special two-hour edition this Thursday beginning at 7:00pm.

In keeping with our long-standing tradition of bringing you the best that television has to offer, we happen think that fans of British drama on KERA will love Midsomer Murders. We hope you’ll agree. Let us know what you think.