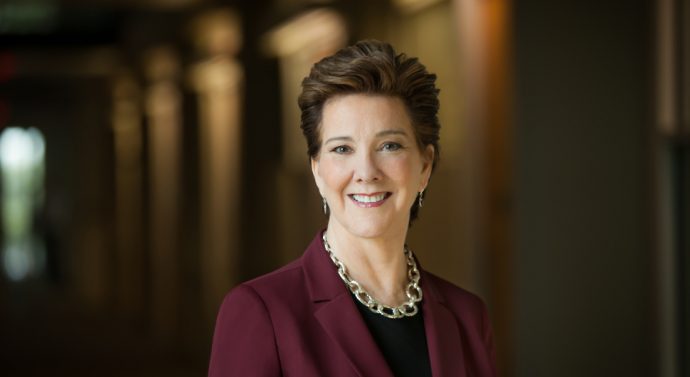 DALLAS/FORT WORTH – KERA President and CEO Mary Anne Alhadeff has announced she plans to retire after a prolific 40-year career as a public broadcasting leader. Ms. Alhadeff will continue to serve in her position through the end of 2019.

Ms. Alhadeff’s tenure with KERA is marked by unprecedented growth for the organization. Under her guidance, KERA launched Art&Seek, the premier destination for arts and culture news in North Texas; KXT 91.7 FM, one of the most-listened-to public Triple-A stations in the country; and Think with Krys Boyd, KERA’s signature talk program that now broadcasts on 22 stations across the state of Texas. As a result, KERA’s audiences, membership and community financial support are at all-time highs.

“Through Mary Anne’s visionary leadership, KERA has become one of the most respected public broadcasting stations in the country,” said Jennifer Altabef, Chair of KERA’s Board of Directors. “She has elevated KERA’s programming and service to connect with more people, more effectively than ever before. We are grateful that we have until the end of 2019 to celebrate her accomplishments as an outstanding leader of KERA.”

Other notable milestones under Ms. Alhadeff’s leadership include the launch of CEO with Lee Cullum, which features interviews with business leaders from North Texas and around the world on KERA TV, and a bold expansion of the station’s local news department. Since the expansion, KERA has received significant recognition of its news coverage, including the station’s first-ever national Edward R. Murrow award for outstanding journalism in 2017.

“For nearly 60 years, KERA has served North Texans as an indispensable resource for our community. It has been an honor to lead such a thrilling period of expansion as we’ve deepened our connection with the community and engaged audiences in exciting new ways,” said Ms. Alhadeff. “It’s been an honor to work with colleagues I deeply admire in service of an organization that’s so essential to so many. I’m excited to see how KERA continues to grow its service to North Texas.”

Ms. Alhadeff’s retirement will follow 14 years as the President and CEO of KERA, which was preceded by an already illustrious career in public broadcasting leadership. Previously, she served as President and CEO of the statewide Maine Public Broadcasting Network, a community-licensed television and radio media organization. During her tenure, MPBN completed a successful capital campaign to support the network’s digital television conversion and to expand local programming and educational outreach.

Before beginning her successful career as an executive, Ms. Alhadeff was a television producer for programs that have aired on PBS, Showtime, HBO, BBC London and CBC Canada. Her productions have earned awards from the Corporation for Public Broadcasting, the National Academy of Television Arts and Sciences (Emmy Awards) and the New York Film Festival, among others.

Beginning in 2019, KERA will conduct a national search for the organization’s next President and CEO. Ms. Alhadeff will continue to lead the organization as it prepares for this transition.

“I can’t wait to see what the future holds for KERA,” she said. “It’s been a privilege to serve our incredible North Texas community, and I am grateful to everyone who has been part of this rewarding chapter of my life.”